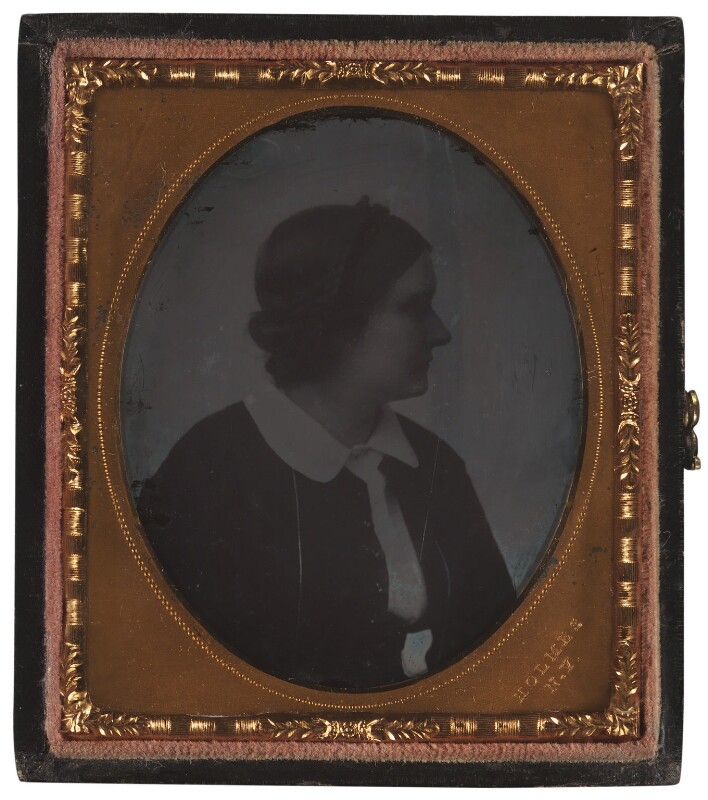 The clue to dating and placing this photograph of Barbara Leigh Smith Bodichon is in the studio stamp at the lower right-hand corner of the brass mount, ‘HOLMES / N.Y.’ Barbara had married Dr Eugène Bodichon on 2 July 1857, and a few weeks later they were sailing to America on a tour that lasted until June 1858. They apparently stayed in New York City in 1857 and 1858. [1] Unfortunately there are no dates for these visits in Bodichon’s journal and letters, nor is there any reference to visiting a photographic studio. However, George Eliot in her journal entry for 2 and 3 February 1858 noted ‘Wrote to Barbara, 79, East Fifteenth Street, New York’, and this locates the Bodichons in the city in February 1858, at least. [2]

The photographer was probably Silas A. Holmes (1820–1886), proprietor of ‘the “Picture Factory”’, or possibly William B. Holmes (1849–51), both producers of daguerreotypes, at 289 Broadway, New York City, in the late 1840s and early 1850s. [3] The ambrotype, or collodion positive on glass, was developed in the early 1850s on both sides of the Atlantic as a cheaper, faster alternative to daguerreotypes. Ambrotypes were in turn superseded by the still cheaper, less fugitive, albumen (paper) prints by the end of the 1850s.

Barbara Bodichon presented the photograph to her colleague and ‘dearest saint’, [4] Mrs Elizabeth Malleson (née Whitehead, 1828–1916). Like Barbara, she had been brought up a Unitarian, and they went to the same Unitarian school in Clapton though at different dates. Barbara made Elizabeth Whitehead ‘chief mistress’ of Portman Hall School, a progressive and experimental institution she had founded in 1854. Malleson’s biographer wrote ‘[Mme. Bodichon] remained one of Elizabeth Malleson’s closest and most loved friends, though in later years distance and broken health prevented their meeting except rarely.’ [5]

According to Elizabeth Malleson’s daughter Rachael Poole, who handled the offer of the photograph to the National Portrait Gallery, it ‘was given by Madame Bodichon herself to my mother in 1857 or 8 – My mother – who is Mrs Elizabeth Malleson – was her life long & very intimate friend.’ [6] The offer of ‘the poor little daguerreotype’ was made diffidently, especially as it went to NPG Trustees meeting on 24 October 1912 ‘paired’ with another portrait of Barbara Bodichon, a painting separately offered by Barbara’s sister.

Mrs Malleson need not have worried. The Trustees were put off by the scale of the painting and declined it, while the photograph was accepted as a reference item: ‘The Trustees inspected two portraits of Barbara Leigh Smith Bodichon, 1827–1891, benefactress of Girton College. After some discussion it was decided that the oil-painting by Emily M. Osborn, which was offered by Miss Anne Leigh Smith, sister of Madam Bodichon, was unsuitable for acceptance owing to its size, but that the daguerreotype offered by Mrs. Malleson, through her daughter Mrs. R.L. Poole, should be accepted for the Reference Department.’ [7]

The 1970s was a period of reorganization for the NPG Reference Collection, and in particular of dedicated cataloguing of the large collection of reference photographs. In 1979 the ‘daguerreotype’ of Barbara Bodichon, 1681B, was transferred to the Primary Collection, given a new accession number, NPG P137, and catalogued as an ambrotype.

In this image, Bodichon’s shadowy profile is silhouetted against a lighter background. Holmes’s glass plate is overlaid with a brass mount with an oval aperture; this mount (or ‘mat’) also serves to screen the imperfections of the collodion process at the far edges of the plate. Plate and mount are inserted into the left-hand panel of the photograph case. The image does not reproduce very clearly, and consequently this photograph is less well known than, for example, the cartes de visite of Bodichon by Disdéri (see ‘All known portraits, Photographs, ?late 1860s’, especially pose [a]). However, like other ambrotypes, NPG P137 conveys considerable physical presence, especially when it is judged as a precious and apparently unique record, still embedded in the velvet-lined case as when given to Elizabeth Malleson in 1858.

The sitter; Mrs Elizabeth Malleson; by whom presented, October 1912.

Off the Beaten Track: Three Centuries of Women Travellers, NPG, London, 2004 (no cat. no.).