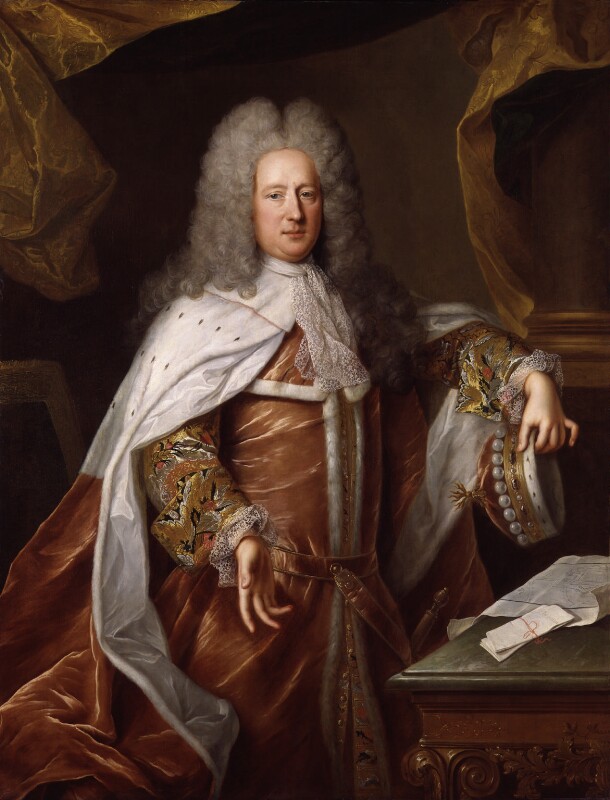 NPG 593 commemorates Bolingbroke’s brief ambassadorship in Paris in August 1712. He is shown wearing the coronation robes of a Viscount, an honour he had received the previous month; on the table lie state papers addressed to the Queen and a plan of fortifications, probably those of Dunkirk whose reduction played a prominent part in his negotiations.
The papers may indicate that the portrait was completed within Queen Anne’s lifetime (i.e. before August 1714). [1] It is unquestionably of French origin, although the attribution remains uncertain. Piper considered the handling very close to that of A.-S. Belle (an attribution repeated in 2004), but Edward Corp remained unconvinced. [2]
A version was presented to the Carlton Club by the 3rd Earl of Eldon (d. 1926), and a half-length copy was recorded in a private collection in 1993.

1) It is perhaps surprising that Bolingbroke had his robes with him in Paris in August 1712, the month after his creation although, according to F. T. Smallwood, 'The Iconography of Bolingbroke', Report no.10 of the Friends of Lydiard Trigoze, 1977, p 8, he was careful to take them with him on his flight to Paris in 1715. Bolingbroke attended the coronation of George I on 20 October 1714, when ceremonial dress would have been required.
2) See E. T. Corp, La cour des Stuarts à Saint-Germain-en-Laye, exhibition catalogue, Saint-Germain-en-Laye, 1992, p 89: ‘peinture qu’on attribuait autrefois à Belle …’. NPG 593 had previously been illus. as by Rigaud (E. Gosse, English Literature, 1906, III, p 258).