8 of 641 portraits matching these criteria: 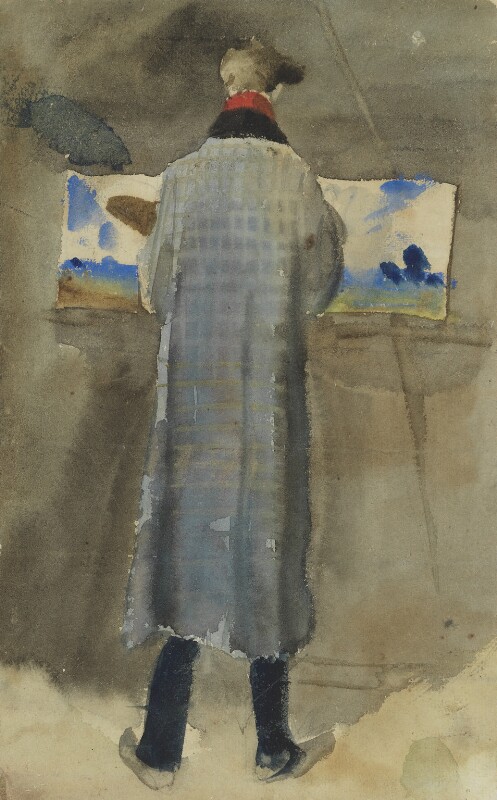 The drawing, reproduced in Race, was accepted 'and unanimously admired' by the Trustees at their meeting 2 April 1914, special thanks being directed to Mr Leggatt. It remained as an authentic self-portrait in subsequent NPG catalogues though a MS note by C. K. Adams, 'identity doubtful', appears in his personal copy of the 1949 catalogue (NPG archive). In the Concise Catalogue,1970, it was relegated to the back among 'Unknown Sitters'. In the Villot sale 1864, lot 69 was catalogued as 'Portrait en charge de Bonington fait par lui-même' but according to Dubuisson & Hughes, Richard Parkes Bonington, 1924, p 194 it was reputed to be the work of Newton Fielding, brother of Copley and a close friend of Bonington though in view of Richard Wallace's inscription on the backing this seems an inadequate reason to doubt its authenticity. Moreover contemporary descriptions accord with the attenuated figure at the easel - 'un grand adolescent' (Delacroix), 'tall and appeared to be strongly built' (Literary Gazette), 'his figure was finely proportioned, in height above five feet eleven' (Library of the Fine Arts).

Whole-length standing painting, his back to spectator, in a bluish-grey check dressing-gown with black collar, red scarf, black trousers, brown slippers; long landscape on an easel against a greyish-brown wash background.

Frédéric Villot sale Paris 25 January 1864 (69), catalogue in Wallace Collection library though with relevant entry cut out; Marquess of Hertford who gave it to Richard Wallace the day after the sale; Maison Edan; Sir John Murray Scott; Ernest Leggatt who gave it to the Gallery in 1914.