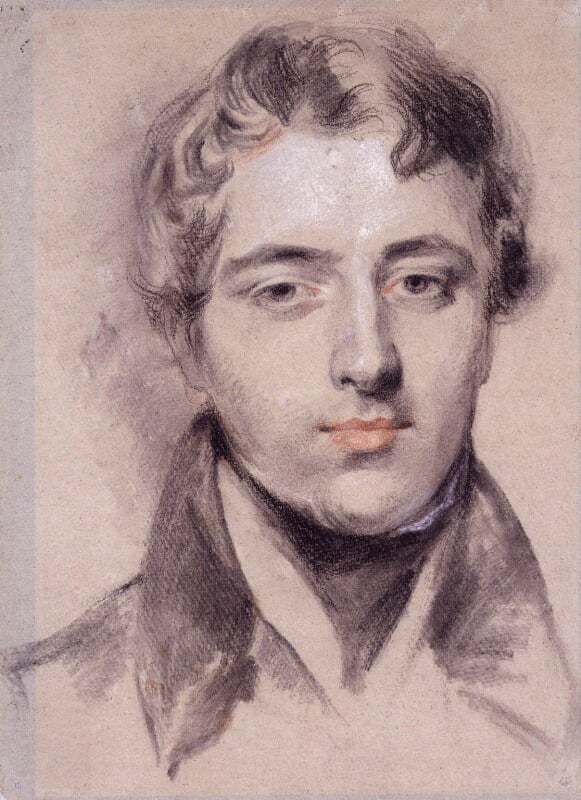 Inscribed on the back in a later hand: Portrait of Bonington by himself.

Callow's misleading inscription on the back can be discounted. According to Mrs Carpenter's son William, 'the drawing is a chalk study done by his mother preparatory to working the other on canvas' (correspondence with Scharf October 1877 in NPG archive). Although the two portraits have often been considered to be posthumous this seems unlikely, certainly in the case of the chalk drawing (NPG 492) which belonged to Bonington himself. Mrs Carpenter probably met Bonington during one of her visits to London in 1825 and 1827 and made the drawing then, though Harding's lithograph was not published by her father-in-law until 1 August 1829 and used to illustrate Harding's portfolio of Bonington's works. It came to Callow (1812-1908) either by bequest or by gift from the family and was in the memorial exhibition in August 1833. It was considered by some to be an 'excellent resemblance' though Delacroix, his friend and travelling companion, did not like it - 'il ne donne pas la moindre idée du pauvre Richard' (letter to Thoré 27 April 1862). Delacroix however was judging years after Bonington's death and from a cheap cut of Harding's lithograph used by Thoré to illustrate his Histoire des peintres. Certainly, apart from a slight sleepiness of expression, neither chalk nor oil show any trace of the tuberculosis which attacked him in 1828. The light grey eyes in the oil (NPG 444) have been pronounced by H. C. Hall not to be in accord with 'his eyes, dark and penetrating' (Library of the Fine Arts, 1832, p 207), but this description may well have been provoked by his well-known expression of frowning melancholy. The oil was presumably painted later than the chalk, possibly posthumously, the mezzotint by Quilley not appearing until 1831. A watercolour copy, signed and dated: Margaret Carpenter 1834, is in the Castle Museum Nottingham (see Connoisseur Year Book, 1959, p 112).

Head and shoulders similar to NPG 444 but without the bow-tie.

R. P. Bonington; William Callow and given by him in 1877. '... it came to me with a number of original sketches, scrapbooks &c. of Bonington's (after his death) and the portrait was always supposed to be also by himself. The writing on the back is mine and was placed there many years ago by way of identification' (letter from Callow in NPG archive).

Bonington exhibition arranged by his father at 67 Great Russell Street August 1833 - 'we must not omit to mention that an admirable head, the size of life, which we understand is an excellent resemblance of Mr Bonington, drawn in chalk with her usual talent by Mrs William Carpenter, forms an appropriate ornament of the principal apartment' (Literary Gazette, 31 August 1833, p 554); 'R. P. Bonington 1802-1828', Castle Museum and Art Gallery Nottingham ,1965 (321), reviewed by Lee Johnson in Burlington Magazine, June 1965, pp 318-20.

Lithograph vignette (with Bonington's signature) by J. D. Harding published 1 August 1829 by James Carpenter & Son and used as a plate in Harding's Series of Subjects from the Works of the late R. P. Bonington, Part IV, 1830.