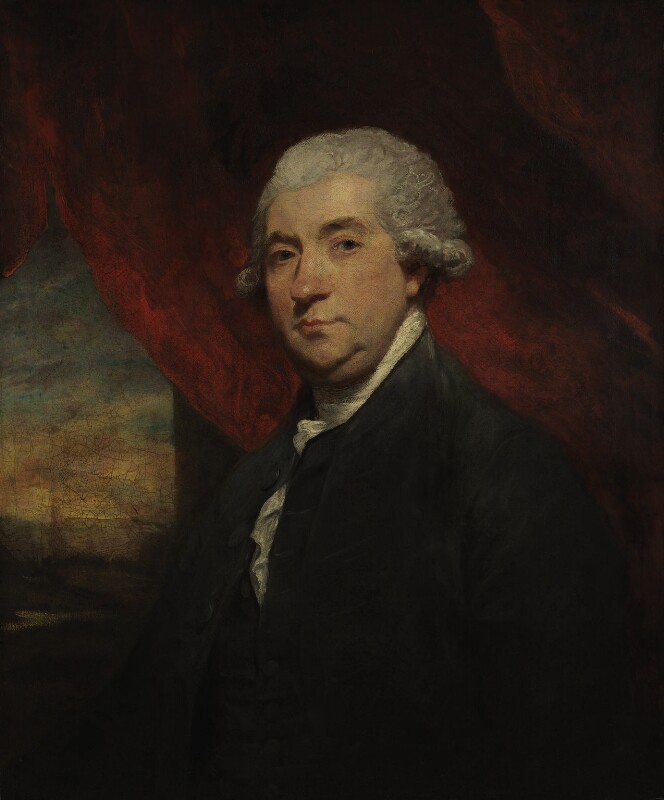 Boswell wrote to Reynolds on 7 June 1785 explaining that, although he could not afford 'any expensive article of elegant luxury', he 'would regret very much that there should not be at Auchinleck [the Boswell family seat in Ayrshire] my portrait by Sir Joshua Reynolds, with whom I have the felicity of living in social intimacy'. He accordingly proposed paying for such a portrait from his legal earnings over the next five years. Reynolds began the portrait on 5 July 1785 and there were sittings on 8 July and 15 August; on 10 September Boswell recorded in his diary, 'Breakfasted with Sir Joshua and had my picture finished'. [1] On that day Reynolds endorsed Boswell's letter of 7 June, but the account was never settled and Reynolds eventually forgave the debt in 1791, the year Boswell’s Life of Johnson was first published with a fulsome dedication to him. Malone described the portrait as 'a perfect and very characteristic likeness'. [2] The engraving by John Jones was published on 17 January 1786 and the Morning Herald alleged that Boswell tried to have it shown in every printseller's window, like a portrait of Fanny Kemble. [3]
NPG 1675 is a studio version and NPG 4344 a late nineteenth-century bust-length watercolour copy by J. Brownlee Hunter. [4] An early copy (in a private collection in Philadelphia in 1970) was lithographed with a plain background in the mid-nineteenth century. Versions were exhibited at Manchester 1857(British Portrait Gallery, within the Manchester Art Treasures exhibition, 305) lent by James Crossley (described as ‘formerly the property of Boswell’s son, James’); at Edinburgh 1885 (46) lent by Mrs George Mounsey, and at the New Gallery 1891 (313) as after Reynolds lent by Philip Norman (sold Christie’s, 24 June 1932, lot 72). [5] In the younger Boswell’s sale, Sotheby’s, 3 June 1825, lot 3287 was a ‘Portrait of Jas. Boswell esq. copied by S. Harding in 1795 from a picture by Sir Josh. Reynolds, painted in 1789’, and lot 3289 ‘a three-quarter-length portrait of James Boswell, esq., in oil’. [6] A miniature version by Thomas Day was sold Christie’s, 11 July 1985, lot 387.

By descent from the sitter to Sir James Boswell, 2nd Bt of Auchinleck, whose daughter Emily Harriet (d. 1898) married Richard, 5th Baron Talbot of Malahide; given by the 7th Baron Talbot to Sir Gilbert Eliott, 10th Bt, in 1949; sold by his son, Sir Arthur Boswell Eliott, Sotheby's, 7 July 1965, lot 125, bought Leger for the NPG, the purchase made with the aid of two private donors, the Johnson Club, the National Art Collections Fund and a Government grant.