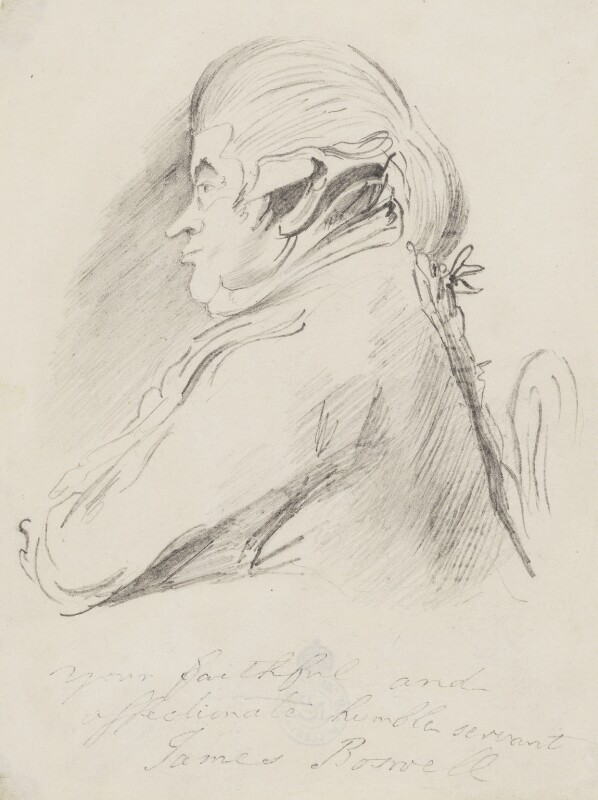 Inscribed below: Your faithful and/affectionate humble servant/James Boswell in facsimile of the sitter’s autograph from his letter to Reynolds of 7 June 1785 (see NPG 4452).

Copied from the anonymous lithograph published in 1831 in J. W. Croker’s edition of Boswell’s Life of Johnson. Croker had been ‘favoured by Mrs Denham with a pencil sketch of Mr Boswell in later life, by Sir Thomas Lawrence, which, although bordering on caricature, is so evidently characteristic, and (as the editor is assured) so identically like that he has had it copied [i.e. lithographed], and thinks it will be acceptable as a lively illustration of both the mind and manners of Mr Boswell - busy self-importance and dogmatical good-nature were never more strongly expressed’. [1] The Denham drawing is now in the Yale University Library. [2]
A related but less finished drawing, inscribed (apparently by Joseph Farington) James Boswell Esqr from memory by T. Lawrence, [3] is in the Tate Gallery (T 8151; Oppé collection); a somewhat caricatured copy in blue chalk, from the collection of L. G. Duke, was sold Sotheby’s, 11 March 1971, lot 51; an etching in the British Museum (1925.5.11.238) of a closely-related head is inscribed S Lysons (presumably Samuel Lysons, the owner of Lawrence’s drawing of Horace Walpole, see NPG 3631).

Garlick 1964
K. Garlick, ‘A Catalogue of the paintings, drawings and pastels of Sir Thomas Lawrence’, Walpole Society, XXXIX, 1964, p 217 as copied from the engraving.

1 Letter from the Bodleian, 17 December 1934 'the sketch has been on exhibition in this Library since November 7' (NPG archive).