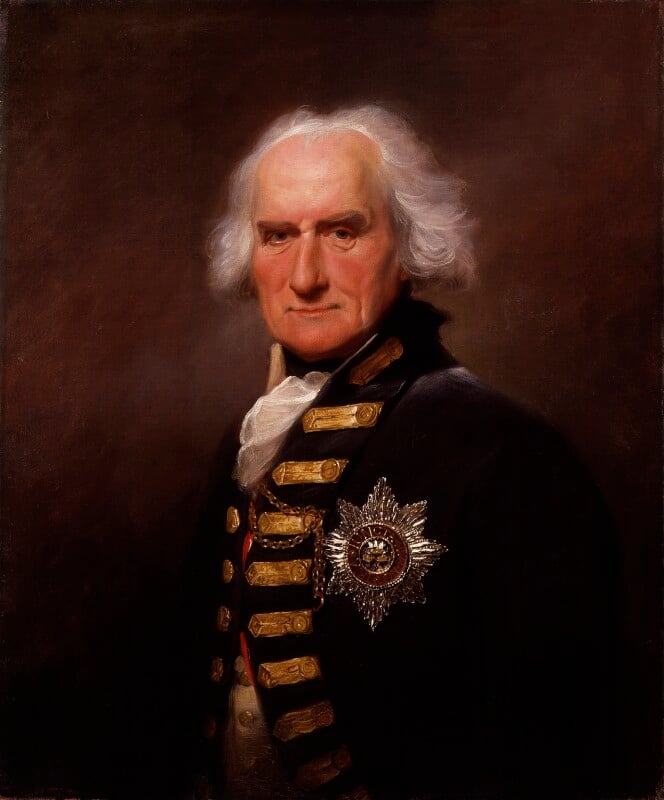 The two three-quarter-length Abbott portraits in the National Maritime Museum and Paul Mellon Collection show him pointing towards a naval action in the left background - the engagement with Admiral Villaret-Joyeuse off Port l'Orient in June 1795. In these, in addition to the Star of KB awarded in 1788, he wears the Gold Medal and chain awarded after the 'Glorious First of June' action in 1794, of which only the chain appears in the NPG half-length. Lord Bridport's 1795 action was painted by Major Adlam, Captain Becher, Godfroy, Livesay, Pocock and Whitcombe, with engravings of each in the National Maritime Museum.

John Noseda (offered as by Beechey) and bought from him 1862.

(of the original)
Mezzotint by V. Green published 16 March 1796; the head only was used by Ryder for a medallion portrait in Smirke's large print COMMEMORATION OF THE VICTORY OF JUNE 1st MDCCXCIV, published by Bowyer 1802; stipple by Robinson, 1 January 1832, for Lodge's Portraits, the original then in Viscountess Bridport's collection; stipple by Freeman for Jerdan's National Portrait Gallery, 1832.