2 of 3 portraits of John Britton 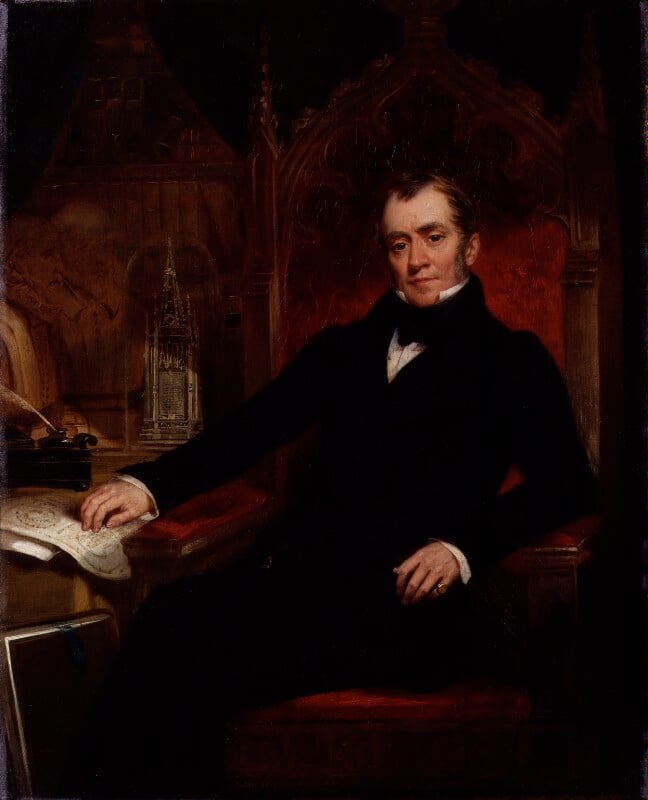 The picture was engraved by C. E. Wagstaff, published 1847 (example in NPG), for Britton's Autobiography (1849), frontispiece. On the table are busts of Shakespeare and the famous antiquarian, William Camden (1551-1623), taken from their funeral monuments (in the engraving the two busts appear in the reverse order). These two busts also appear in the engraving by Thomson after a drawing by Uwins. In 1816, Britton produced an engraving of Shakespeare's bust in Stratford Church with 'Remarks', later republished in his Autobiography. The model of a monument on the table also probably has a precise relation to Britton's writings. The plans on which his right hand rests are of Stonehenge; in 1842 he published an essay on Avebury and Stonehenge, also later republished in his Autobiography. Similar plans appear in the Uwins drawing. The chair in which Britton sits is reminiscent of A. C. Pugin's designs, and expresses Britton's overwhelming Gothic sympathies. He and Pugin actually collaborated on a number of architectural books.
An earlier painting of Britton by Wood was engraved by J. Thomson, under Britton's direction, and published by H. Fisher, Son & Co, 1828 (example in British Museum). In both this engraving and the NPG painting, Britton looks considerably younger than his age.

The sitter, presented by his widow, Mrs Helen Britton, 1882.