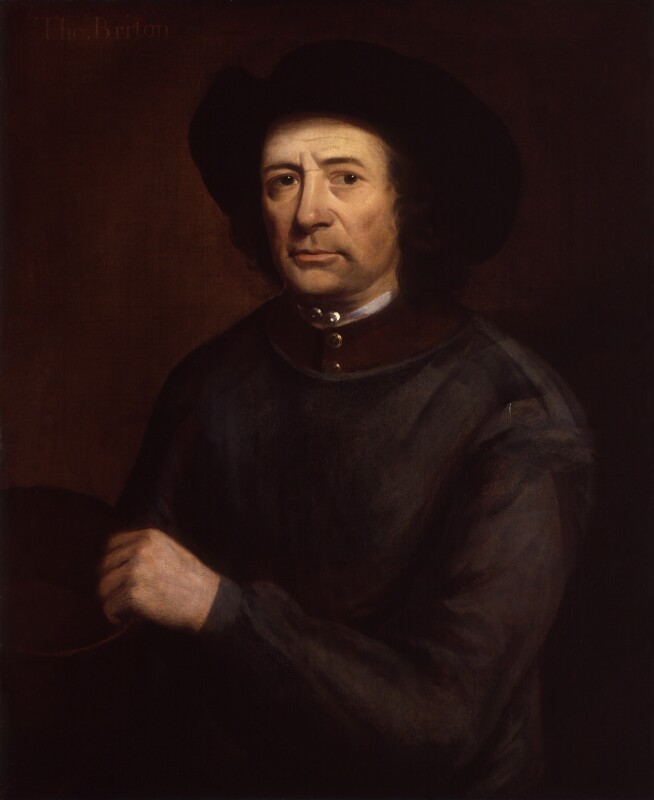 1 As recorded by Scharf in the NPG 1888 Cat. p 63 - but illegible today; in Sir Henry Ellis, List of Portraits suspended on the Walls of the Eastern Zoological Gallery, British Museum, 1843, no.114, his age is given as 61. The age of 63 does not agree with the date (which would better be 1708); Britton’s baptism on 14 January 1644 is recorded in the registers of St Mary’s, Rushden, Northants (photograph on file).

Wollaston described painting NPG 523 to John Hawkins: having completed his work early, Britton had decided to call one morning on his friend, but anxious not to appear disrespectful in his working dress he cried ‘small coal’ outside the artist’s studio, as if still on his rounds; Wollaston recognised his voice and asked him in, painting him ‘in his blue frock, and with his small coal measure in his hand, as he appears in the picture in the Museum’. [1]
Wollaston was also among the musicians who performed at Britton’s concerts.

Ellis 1843
Sir Henry Ellis, List of Portraits suspended on the Walls of the Eastern Zoological Gallery, British Museum, no.114 as ‘Aetat.61, 1703. By Woolaston’.

Sir Hans Sloane,1 the British Museum; transferred to the NPG 1879.

J. Simon (J. Chaloner Smith, British Mezzotinto Portraits, 27; reversed; with verses: Tho’ mean thy Rank, yet in thy humble Cell … So low a station, such a liberal Mind); W. Maddox c.1819 (reversed, without bucket, for J. Caulfield ed., Portraits, Memoirs, and Characters, of Remarkable Persons, I, 1819).