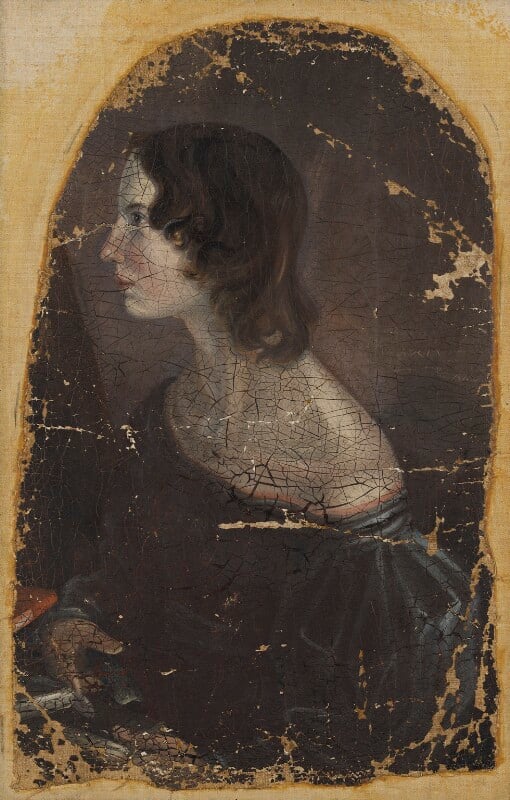 This painting, which was discovered at the same time as the famous group portrait of the Brontë Sisters (see NPG 1725), is apparently all that remains of a group portrait of the Brontës by Branwell Brontë of which it formed the right-hand part. The shape just visible to the left is almost certainly the shoulder and arm of Branwell Brontë, who also appears second from the right in the two other Brontë groups (NPG 1725, where he painted himself out, and the 'Gun Group'), his head forming the apex of a triangular composition. While the identification of the Brontë sisters in the surviving NPG group is now generally accepted, the identity of the sitter in this fragment is still disputed, and the claims of Emily and Anne have both been pressed.
In an interview in 1895, the Rev Nicholls told Clement Shorter that he had cut out a portrait of Emily, from a group picture, which he then destroyed, and gave the fragment to the Brontës' old servant, Martha Brown, during one of her visits to him in Ireland. [1] Martha Brown is known to have been in possession of this portrait of Emily in 1879, for in that year, Sir William Robertson Nicoll visited her in Haworth and saw it there:

1) Mrs Gaskell's Life (1914), pp 135-6 n.
2) British Weekly, XLV (29 October 1908), p 101.
3) Letter of 52 February 5954 (copy of original letter, NPG archives).
4) The right hand figure of the 'Gun Group' (in profile) was reproduced as the frontispiece to Wuthering Heights, having apparently been identified by the Rev Nicholls as Emily (see Mrs Gaskell's Life (1914), pp 535-6 n). It almost certainly represents Anne.
5) See the Sphere, 14 March 1914, where a letter from a niece of Mrs Nicholls is quoted: 'On examination Mrs Nicholls recognized the portrait of Emily as one which had been cut out of a group by Mr Nicholls, but the second picture, the group of the three sisters, she had never seen till then notwithstanding the many years it must have been in the house.'
6) See King's County Chronicle, 12 March 1914, which quotes a letter from Sherrard. Sherrard cannot have seen the fragment which Martha possessed for over twenty years, and it is doubtful if he had studied it very closely.
7) See Mrs Edgerley's article, Brontë Society Transactions, part XLII (1932).
8) See in particular the article by Dame Myra Curtis, Brontë Society Transactions, part LXIX (1959), the most recent defence of Anne as the figure represented in the fragment. This theory was first put forward by Mrs Chadwick in the Morning Post, March 1914. In support of Emily, however, one could cite Charlotte Brontë's comment that G. H. Lewes' face reminded her of Emily (see Winifred Gérin, Charlotte Brontë (1967), p 431); there is a certain similarity between the fragment and an early drawing of Lewes in the NPG (1373). Also if the profile water-colour of Anne by Charlotte Brontë in the Brontë Parsonage Museum, Haworth, is correctly identified, as seems likely, this would again argue for Emily; the water-colour and fragment show a quite dissimilar cast of features. I am grateful to Winifred Gérin, the recent biographer of Anne and Charlotte Brontë, for these suggestions; she firmly believes that the fragment is Emily.
9) See Dr Nixon's excellent summary of the evidence for and against Emily and Anne, Brontë Society Transactions, part LXVIII (1958). She comes down on the side of Emily.

Haworth Parsonage; inherited by the Rev A. B. Nicholls (Charlotte Brontë's husband), on the death of the Rev P. Brontë, 1861; possibly the picture given to Martha Brown; discovered by the second Mrs Nicholls on the top of a cupboard in 1914, and purchased from her, through Reginald Smith, in the same year.