4 of 102 portraits by Sir Francis Grant 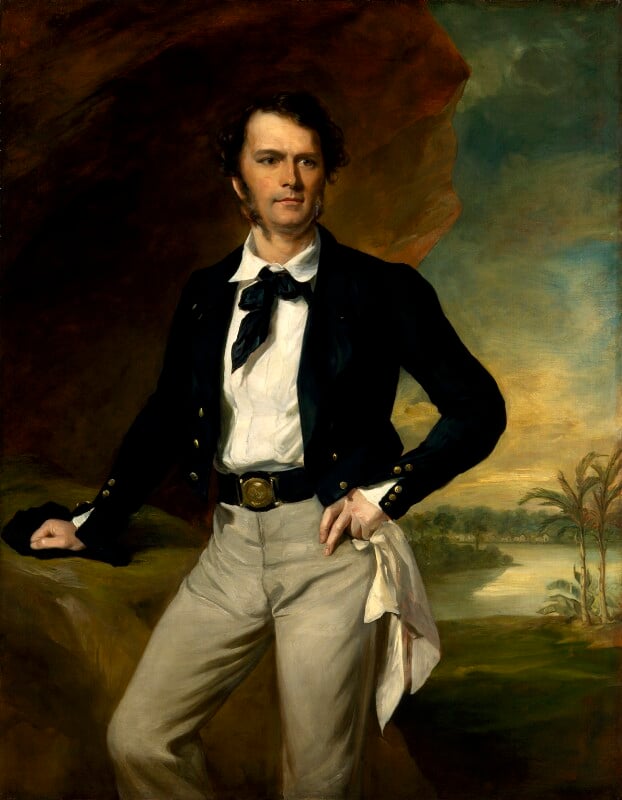 Inscribed in stencil on the stretcher: (904) Sir F. Grant

Brooke, in undress naval uniform, is set against an idealized Eastern landscape, presumably intended to represent Sarawak. The picture was apparently painted as an act of friendship, and given to Brooke by the artist (Grant's 'Sitters Book' lists no price against the entry for the portrait). The artist's nephew, Charles Grant, was a friend of Brooke (see E. Hahn, James Brooke of Sarawak (1953), pp 128-9), and Charles' sister, Annie, eventually married Brooke's nephew, Brooke Johnson (later Brooke Johnson Brooke), the eldest son of the Rev F. C. Johnson (see above). The portrait was painted shortly after Brooke's return to England on 1 October 1847. Henry Keppel records in his diary for 20 October 1847: 'Accompanied Brooke to Frank Grant's, who was painting his portrait, indeed a striking likeness. Grant the first artist in the country'. It is not known why the portrait did not pass to Brooke's heir, his younger nephew Charles Johnson Brooke, but to the latter's father, the Rev F. Johnson; there was, however, a good deal of acrimony over the succession (the elder nephew was passed over for the younger), so the portrait may not have been treated as an heirloom, hence its sale. It is not mentioned in Brooke's surviving will in Somerset House. He had originally left all his possessions to Baroness Burdett-Coutts, but later revoked this will; the text of it is given in O. Rutter, Rajah Brooke and Baroness Burdett Coutts (1935), pp 156-7. [1]
The portrait was engraved by W. Holl, published J. Murray, 1848 (example in NPG), for Captain R. Mundy's Narrative of Events in Borneo and Celebes from the Journals of James Brooke; it was also engraved by G. R. Ward (example in NPG). A copy is owned by the Borneo Company (part of the Inchcape Group), London, and others are recorded.

1) I would like to record my thanks to W. Craib Lang, who provided invaluable help in establishing the history of the portrait.