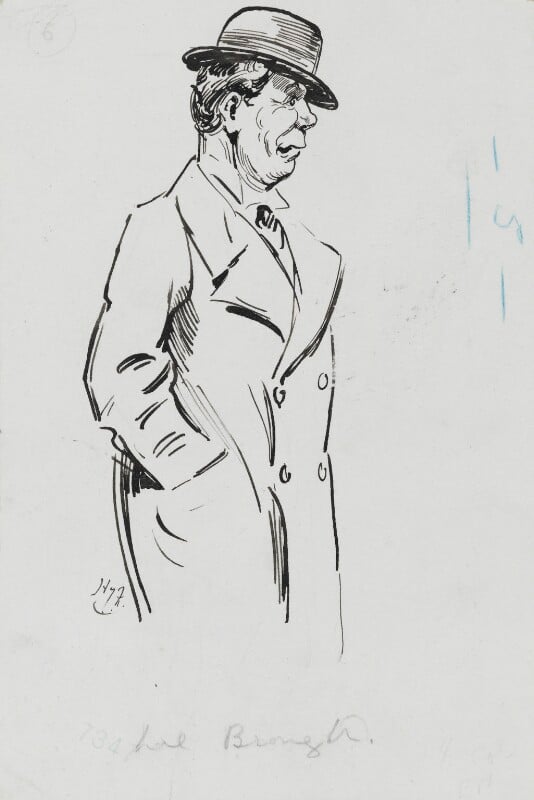 This fairly swift sketch, drawn with characteristic vigour, emphasizes Brough’s wide mouth by giving it a crooked appearance appropriate to a character actor, and presents him in the manner of a ‘gent’ about town, that is a man with some qualities of the middle-class gentleman and some features, such as the bowler hat and hand in pocket, characteristic of other social groups, a dual aspect that reflects the sitter’s wide popular appeal on stage and off.

Harry Furniss met Brough soon after the former moved to London in 1873. He socialized with journalists, illustrators and actors, meeting them in offices, theatres and bars along the Strand. In his memoirs of this period, Furniss wrote:

A well known comedian who was, for a time, at the Gaiety Theatre and, at all times, the wit of the Strand, Lal Brough, one of the famous Brothers Brough, was originally connected with the Illustrated London News. Lal Brough was an excellent raconteur; he imitated the Cockney, the Yorkshireman, the Scot, Yankee and Irishman with marvellous truthfulness; and no matter how busy one might be, or how much in a hurry, Brough would never let you pass him in the Strand without telling you his latest story. In this way his stories became public property and have long since been put on the shelf labelled ‘chestnuts’. [1].

This volume of memoirs was published in 1919, a decade after the sitter’s death. The sketch can be contrasted with Furniss’s other caricature (NPG D87), which emphasizes the glaring eyes for which Brough was known, and depicts him seated on an office chair, albeit still wearing his overcoat, holding a newspaper, in reference to his earlier career as an editor. On the wall behind is a comic image of Brough in costume as a scowling Elizabeth I, referring to his renowned performance in a cross-dressing burlesque version of Kenilworth, played in Liverpool in 1865, [2] which Furniss presumably heard of through Brough’s journalist friends. By contrast, the present sketch shows him with no visual references to his profession, but as he could have appeared to passers-by in the street – the Strand, for example. At the same time, contemporaries may well have recognized aspects of the ‘ordinary bloke’ roles that Brough played to such effect onstage.

Both Furniss and Brough were early members of the Savage Club, whose historian wrote of the actor:

Lionel Brough everybody knows. His jubilee as an actor was celebrated by his friends and admirers in October, 1904; but he did not permanently attach himself to the stage until 1863. Before that time, though he had done much as an entertainer, his daily work was connected with journalism. When John Timbs was editor of the Illustrated London News, he was clerk or assistant to that industrious antiquary. He is said to have published the first number of the Daily Telegraph, and to have organised the existing system of selling newspapers in the streets. Then he was for five years on the Morning Star. Of his excellence as a comedian, of his well-deserved popularity, of his wit and good nature, it is certainly not necessary for me to speak in this place. He is everybody’s favourite. When he sent in his annual subscription to the Club in 1899 it was returned to him, and he was made a life-member. [3]

Neither this work nor NPG D87 is securely dated. The present work is one of a number of smaller-scale caricatures of public figures which are unrelated to Furniss’s series The Garrick Gallery Caricatures, privately published circa 1913–16. As well as the pencilled inscription giving the sitter’s name, the sheet has a number of other markings: a ‘7347’ stamped in blue ink lower left; a pencilled figure ‘6’ upper left; blue pencil marks upper right; an abraded area centre right, as if part of a design or inscription was scratched out; and an almost entirely erased pencilled inscription ‘½ col / EW’ lower right. The last of these conjecturally relates to publication of the sketch as it appeared as an embedded illustration occupying the left half of a page in Furniss 1919; the other marks could indicate prior publication elsewhere. As it depicts Brough with dark hair, in middle life, the sketch may have been executed at an earlier date, but the likelihood is that it was drawn from Furniss’s keen memory for the purpose of publication in 1919.

1) Furniss 1919, p.14. The slight barb at the tail of this recollection may have its origins in the fact that after a decade as a keen member of the Savage Club, which he claimed was brought into being by the Brough brothers, Furniss left it in favour of the Garrick.
2) See Liverpool Mail, 22 Apr. 1865. In the Cheshire Observer, 22 Apr. 1865, p.65, Brough is recorded as creating ‘roars of laughter’ in ‘the most gorgeous Easter piece’. Then aged 11, Furniss could possibly have witnessed this performance, but the comic image more likely reflects its extended fame.
[3] Watson 1907, p.115.

Harry Furniss; Maurice Furniss, from whom purchased 1948 via Theodore Cluse with many other items.