3 of 280 portraits of Henry Brougham, 1st Baron Brougham and Vaux 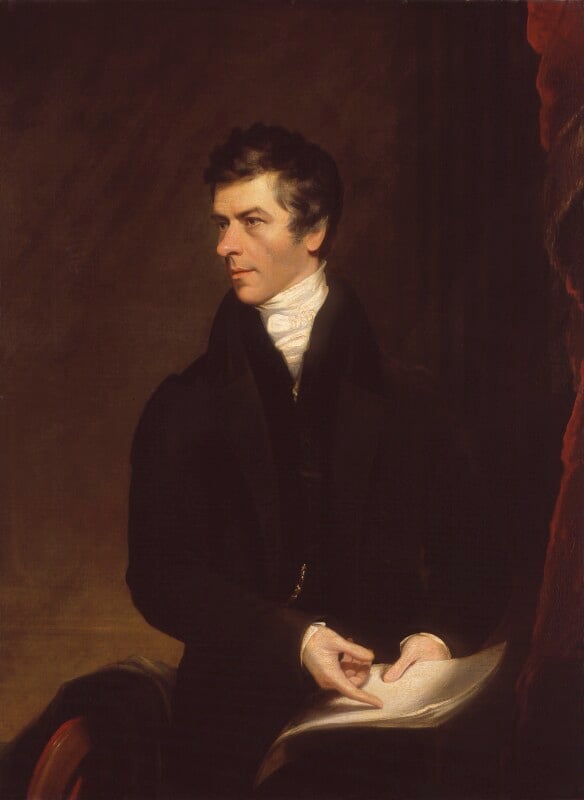 Inscribed in ink on a paper on the back: 2 Henry Brougham Esq. M.P. painted by/Lonsdale 8 Berners St London.

The original of NPG 361 was painted for Brougham's family and presented to his mother by the Freeholders of Westmorland to mark their appreciation of his efforts to free them from the Tory yoke of the Lonsdales. It remained at Brougham Hall Penrith until shortly before the
house was demolished in 1934; its present whereabouts are uncertain. The replica, NPG 361,
remained in Lonsdale's studio as a model for Turner's mezzotint and possibly for making future copies, and stayed in the family possession until presented by his son in 1873. The portrait was favourably noticed at the Suffolk Street exhibition in 1828 - 'without intending any allusion to the splendid oratorical powers of the original, we must say that this is one of the most speaking portraits we ever saw. The resemblance is perfect. It is firmly and forcibly painted; and attracts as much attention in the room as Mr Brougham himself does when he rises to address the House of Commons' (Literary Gazette, 1828, p 201). His stepdaughter, Marianne, describing a drawing of it, thought it too good-looking to be a true resemblance. The 'Bill for Preventing Abuses of Charities' held in his hand and clearly lettered in the engravings was passed in 1818 and led to the founding of the Charity Commissions. It is reproduced in Frances Hawes, Henry Brougham, 1957, p 16.
For Lonsdale's drawing, see NPG 5038.

The artist, then his son Judge James John Lonsdale and given by him 1873.

Large mezzotint by Charles Turner lettered: From an original Painting by Lonsdale at Brougham Hall presented to his Family by the Independant Freeholders of Westmoreland in 1821, published 21 January 1822 (Alfred Whitman, Charles Turner, 1907, 75); a small stipple on steel by Fenner was published in 1825; in both these prints the paper is inscribed: 'A Bill for preventing Abuses of Charities'. A large lithograph, head and shoulders only in reverse, printed by Robertson & Ballantine of Edinburgh, is lettered: From a capital likeness at Brougham Hall. The drawing for Turner's mezzotint is probably that in the British Embassy Moscow (Government Art Collection), inscribed on the back by Lady Malet, Brougham's stepdaughter: 'This drawing was bought because of its strong resemblance to Ld. Brougham as I remember him in my childhood. The eyes should be smaller and the brow more rugged - all the gleam and fire of his eye is wanting, but no drawing could give that - and on the whole it powerfully reminds me of old Ld. Brougham; the picture of which this is the sketch is very like - but it is too good-looking to be a keen resemblance. M. D. Malet. At Wilbury in May [no date]. I thought I would write this.'