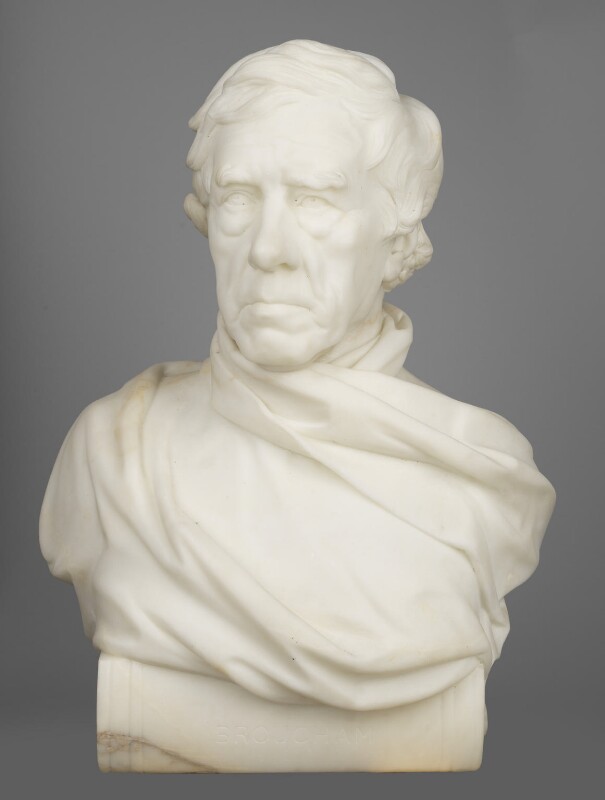 Incised on the book socle: BROUGHAM and on the back: John Adams Acton Fecit Rome 1867/Original JA (monogram).

The marble bust, of which NPG 1588 is either the model or a cast, shows Brougham aged 89 in a Scottish plaid of which the lines are more pronouncedly incised than in the plaster version. Marble versions were exhibited RA 1867 and 1872; two are in the Reform Club London and the Scottish NPG, both dated 1867; a bronze copy in the Privy Council Offices, Whitehall (GAC 1840/1) was exhibited RA 1868 (1081). Contemporary comments were not too favourable: 'J. Adams, who commonly gains nice modulation in flesh surface, has certainly tortured unmercifully the not over handsome features of Lord Brougham' (The Art-Journal, 1867, p 146); '… an exaggeration which verges upon caricature ...' (ibid., 1868, p 110). According to information from the Muspratt family, the bust was originally bought by James Muspratt, a great admirer of Brougham (letter in NPG archive) and was bequeathed to the Gallery by Muspratt's son together with a portrait of Sheridan Knowles (NPG 2003, see Richard Ormond, National Portrait Gallery: Early Victorian Portraits, 1973, p 251).

James Muspratt and bequeathed by his son Edmund Knowles Muspratt in 1923.