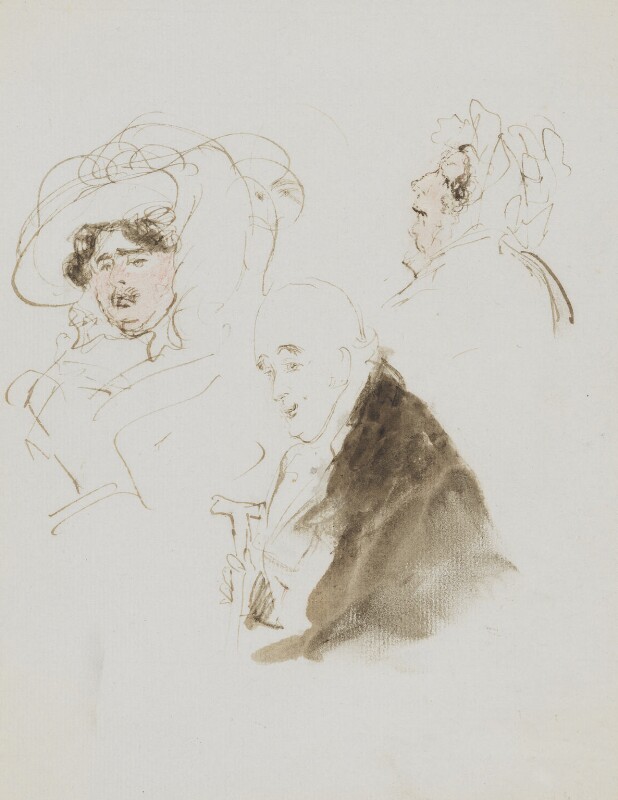 Landseer first visited Holland House in August 1833 and stayed there again for a fortnight in 1836 in order to paint the portrait of Dr Allen. Mrs Brown, Lady Holland's lady's maid and later her formidable housekeeper, died leaving all her savings to her mistress. Her sitting room in the east wing of Holland House was known for many years as Mrs Brown's Room (Ilchester, Chronicles of Holland House, 1837, p 477). In spite of Landseer's uncompromising treatment of Lady Holland in this drawing their relations were excellent and he could often be seen pushing her wheelchair across the gardens of Holland House (Fanny Kemble, Records of Later Life, 1882, I, p 103). The enormous hat with ostrich feathers was fashionable from 1829 to 1833 when it was replaced with a high crown hat. The occasion of Landseer's first visit to Holland House in 1833 was therefore the probable date of this drawing. Three undated Landseer drawings are at Baron's Court (boxes II and IV), 'Lord Holland seated with walking stick', 'Lady Holland with maid massaging her leg' and 'Lady Holland in wheelchair with page', exhibited RA 1961 (137).

A group of Lord Holland, head and shoulders to left smiling benevolently in black coat holding walking stick, Lady Holland on the left in a large feather hat and commanding expression, her face lightly chalked in red; Mrs Brown to the right, her nose in the air and face also lightly chalked in red.