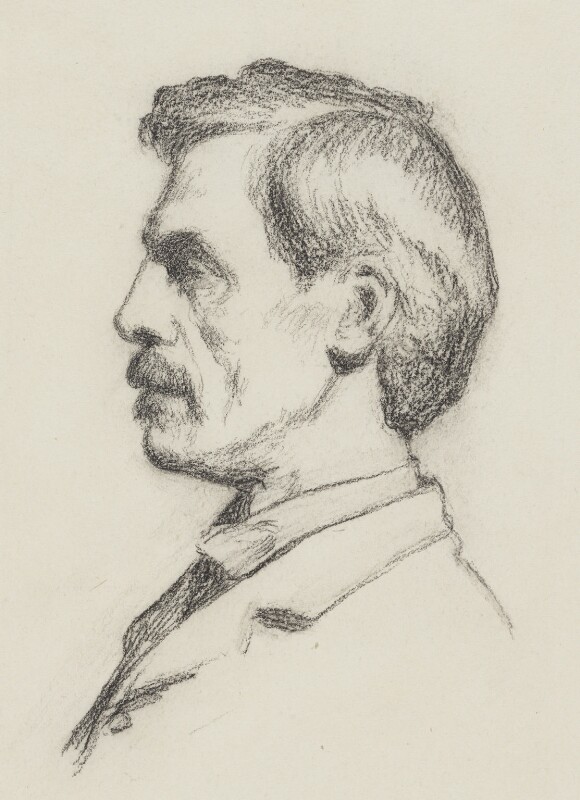 This portrait was drawn apparently to commission to accompany the article by Dugald Sutherland MacColl entitled ‘Professor Brown: Teacher and Painter’ in the Magazine of Art, September 1894.[1] Although published some months later, the article marks Brown’s appointment as director of the Slade School at the age of 41 and discusses his own art as well as his teaching. The then editor of the Magazine of Art was Marion Harry Spielmann, who retained the drawing. In the magazine, the drawing was reproduced in red, as if drawn in sanguine, and attributed to Walter Sickert. A correction followed: ‘The portrait of Professor Fred [sic] Brown in last month’s number was drawn not by Mr Walter Sickert but by Mr. P. Wilson Steer.’[2]

Philip Wilson Steer was with Brown a founder member of the New English Art Club in 1886, and appointed by Brown as Professor of Painting at the Slade in 1893, where the present drawing could have been executed. Both men were somewhat solitary in nature but were close friends within a small circle centred on the Slade.[3]

The image may be compared with the portrait by George Charles Beresford (see 'All known portraits, Photographs, 1904') which shows the same profile, hair and moustache but a more receding chin and rather thicker neck. It was included in a selection of eleven drawings purchased from Spielmann in 1936.[4]

Head-and-shoulders, profile to left, with moustache and longish hair.

M.H. Spielmann, sometime editor of Magazine of Art, from whom purchased 1936 with other drawings.