3 of 7 portraits of Dugald Sutherland MacColl 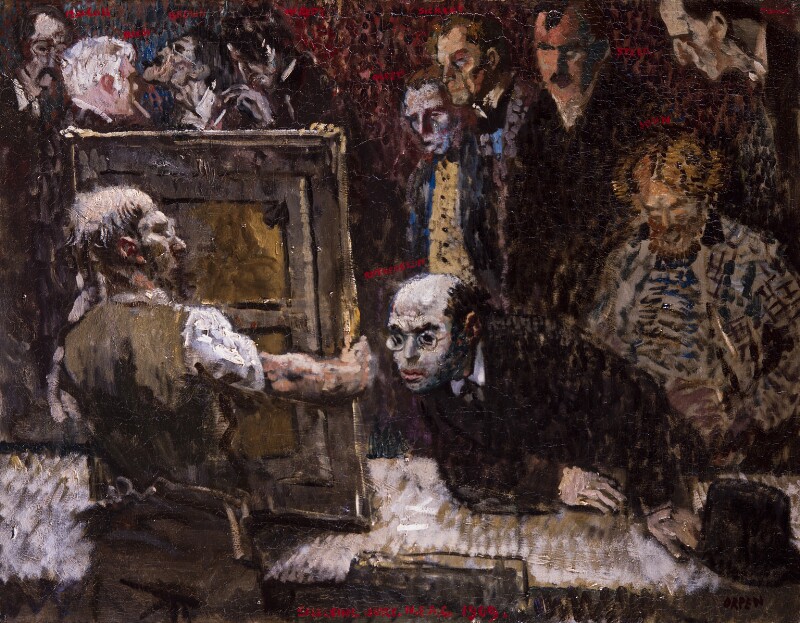 The first formal meeting of the New English Art Club took place in January 1886. There were fifteen founding members; of the sitters in this portrait, Philip Wilson Steer and Frederick Brown were among the original group. The aim was to establish an exhibiting society along French lines. Having studied in Paris, these men were influenced by the plein-air painting of Jules Bastien-Lepage and the Barbizon School and also by the Impressionists. All felt that the Royal Academy had not given this new approach to painting its due. Moreover, they wished to rebel against what they perceived to be the diluted Pre-Raphaelitism dominant within the establishment, with its piecemeal observation uncontrolled by general tone. [1] Commerciality and complacency had resulted in the production of works with no specific unity of vision. In contrast, these young artists insisted upon the application of ‘values’, meaning the proper relation of tones and colours within a picture.

The club was to be ‘run by artists for artists’; in distinction from other artistic bodies, matters concerning membership and the selecting of exhibits were decided on a majority vote, [2] and each member voted annually for the election of the NEAC selecting jury. The club’s first exhibition, consisting of eighty-one paintings and two sculptures, opened at the Marlborough Gallery, formerly the Royal Institute of Painters in Watercolours, on Pall Mall on 12 April 1886. [3] By this point there were fifty members, forty-three of whom exhibited. Frederic Leighton, by then president of the Academy for nine years, is said to have wandered urbanely through the gallery murmuring something about ‘these Impressionists’. He predicted that ‘the second year will try, the third probably disband them’. [4] A critic for the Pall Mall Gazette, however, was impressed: ‘…the three score works in the exhibition reveal a quite unexpected variety of subject and treatment, and undoubtedly a very much higher level of excellence than is to be found in the average Academy or Grosvenor Gallery’. [5] Indeed, although these artists shared a unified aesthetic outlook, they were by no means bound by a common pictorial style. This was to remain an important characteristic of the club.

William Orpen first exhibited at the NEAC in the summer of 1899, having studied at the Slade from 1897. He became a member in 1900 and continued to submit works almost on a yearly basis, up until 1929.[6] In 1904, Orpen’s nominations for the selecting jury were Steer, Brown, Henry Tonks, William Rothenstein, Dugald Sutherland MacColl, Augustus John, Walter Richard Sickert and himself. [7] A photograph recording the jury for that year confirms the relative success of his candidates. [8] It shows the fourteen elected members grouped around a table, in the act of examining a picture held up by a porter to the right-hand side. It bears a striking resemblance to Orpen’s 1909 canvas and proves the authenticity of his composition. [9] Rothenstein is first in line for inspection, his small round head directed eagerly towards the work. John is positioned further back, his relaxed stance signalling the role of a somewhat detached observer. This is a characteristic efficiently captured in NPG 2556, as is D.S. MacColl’s unconscious stoop and a sense of Steer’s quiet concentration.

The idea for representing the NEAC selecting jury was in Orpen’s mind for a number of years before the execution of NPG 2556. In 1905, he produced a very similar sketch for the group, in pencil and red chalk. [10] Although the handling and positions of some of the figures differ, the composition is essentially the same; it bears an obvious resemblance to Henri Fantin-Latour’s Hommage à Delacroix (1864), with regards to the manner of grouping individuals around a central canvas. [11] Orpen’s 1909 arrangement, however, carries a strong element of caricature not evident in Fantin-Latour’s work. Indeed, each sitter is depicted with a certain irreverence as he strikes a characteristic pose, his features comically ghoulish against the gloomy surroundings. Rothenstein, for example, pale, bald and bespectacled, peers towards the proffered canvas with unnerving intensity. Sickert lurks behind him in a rather sinister fashion and John sits slumped in his chair, hands thrust in his trouser pockets, perhaps amused (or asleep). Orpen himself, in a yellow waistcoat, participates in the scrutiny, his face clearly reflecting feelings of boredom and discomfort perhaps resulting from the task of judging other men’s work.

When this portrait was purchased from the Orpen estate in 1932, Clive Bell strongly objected to the acquisition, finding the humorous nature of the work out of keeping with the seriousness of the National Portrait Gallery. In a letter to Henry Hake, then director of the institution, Bell criticized this ‘exceedingly unfortunate’ addition to the collection, regretting the ‘spending of public money upon caricatures of living persons’. [12] This sentiment was apparently shared by MacColl. In 1934 he offered an alternative portrait of the group by Donald Graeme MacClaren (NPG 2663), suggesting it ought to be at the Gallery as a companion piece to Orpen’s caricature oil. [13] He evidently believed this work, although similarly comical in nature, to be a more appropriate and less outlandish representation of his contemporaries. Hake records that whilst MacColl ‘was ready to admit its brilliance’ he pointedly suggested that the Orpen ‘did not do entire justice to some of the persons represented’. [14] In his biography of the artist, Bruce Arnold vigorously defends Orpen’s picture, championing its role as an effective expression of the artist’s later feelings towards the club:

It is a memento mori. He, who had never liked cabals and spared no time for art-politics, implies a certain futility in the caricature treatment of the ten men elected as jurors in 1909 … It was in no sense sour grapes. He had never been rejected. He was very much one of them. But he could say in paint certain things that were not possible in words. What mattered to him was whether the painting ‘came off’. What mattered to the jurors was that they should be running the show. [15]

By 1909, the NEAC had been in operation for over twenty years. Although it remained adverse to the populism of the RA, it had been accused of gradually becoming more resistant to change, marginalizing those painters deemed to be out of step with the club’s ‘clientele’. The collective taste of Tonks, Brown, Steer, Ambrose McEvoy, Rothenstein, Orpen and John tended to dominate successive exhibitions. With its cluster of young middle-aged cronies, NPG 2556 is perhaps a gentle nod towards this perceived elitism. [16]

Simultaneously, Orpen stresses his independence as an artist. The exaggerated facture throughout the canvas is no doubt indicative of his progressive attitude towards pictorial representation as he moved into the twentieth century. When writing about the dominant influence of Impressionism upon English artists during this period, John Rothenstein makes an important distinction: ‘It was challenged by only a few of the most sensitive and independent painters of a younger generation, who, although they looked upon the great Impressionists with reverence and affection, were intuitively conscious of a certain incompleteness in their enchanted vision of the world.’ [17]

Arnold suggests that Orpen can effectively be placed within this bracket. He argues that through his painting, the artist rejected the fundamental limitation of the Impressionist movement, ‘where the fidelity to truth and reality of light inevitably leads to a casualness of subject matter and material content’. [18] Rather, Orpen placed the considerations of form above all else, to which the decidedly Post-Impressionistic stippling of his 1909 canvas attests. Indeed, the vigorous nature of the brushstrokes alongside the application of undiluted dabs of bright pigment stress both the physicality of the scene and of the paint itself.

Purchased by the NPG from the artist’s estate, 1932.