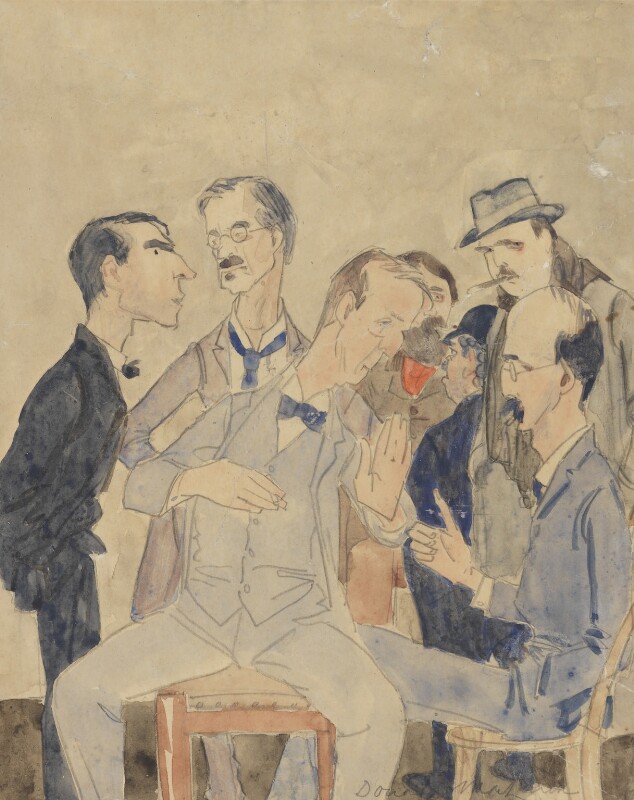 Signed in pencil along lower edge to right: ‘Donald Maclaren’.

The sitters in this slightly caricatured group portrait were all painter-members of the New English Art Club. Frederick Brown and Philip Wilson Steer were among the fifteen founding members of the club and present at the first formal meeting in January 1886. Additionally, Brown and Henry Tonks held the post of Professor at the Slade School of Art successively between 1892 and 1930. While Steer was their teaching colleague (1893–1930), both Augustus John and Ambrose McEvoy were students at the school (1894–8 and 1893–6 respectively). Dugald Sutherland MacColl was an art critic closely associated with these figures; he was also the artist’s uncle.

The group is arranged casually, seemingly engaged in conversation with one another. Tonks and MacColl are seated on chairs in the foreground while the others stand behind them. John is apparently being addressed by a smaller man wearing a bowler hat: his identity is unclear, although he is perhaps another artist or a club porter. It is possible that the sitters represent the selecting jury, in discussion over a submission for the biannual NEAC exhibition. Indeed, these individuals were frequently nominated to form the committee, which was elected each year. They are all represented in William Orpen’s humorous oil sketch, The Selecting Jury of the New English Art Club, 1909 (NPG 2556).[1] However, unlike in that composition, it is not clear that the figures in NPG 2663 are gathered for such a purpose. The background may denote a room at an NEAC exhibition venue, although the interior setting is decidedly ambiguous. Moreover, the haphazard manner in which the sitters are grouped suggests a spontaneous gathering rather than a formal occasion.

Donald Graeme MacLaren was the son of Scottish-born architect James MacLaren and his wife Margaret (born MacColl). He studied at the Slade School, exhibited at the NEAC from 1907 to 1916 and taught drawing at Liverpool University. In 1914 he enlisted in the Army and was killed on the Western Front in June 1917.[2] Acting for MacLaren’s widow in 1934, D.S. MacColl offered the drawing to the National Portrait Gallery as a companion piece to Orpen’s, which had been purchased in 1932.[3] MacColl evidently believed MacLaren’s work to be a more successful portrayal of his NEAC colleagues. Henry Hake (NPG Director 1927–51) describes his meeting with the artist: ‘Mr McColl [sic] expressed himself as dissatisfied with the oil sketch by Orpen, and though he was ready to admit its brilliance, he seemed to think that it did not do entire justice to some of the persons represented.’[4]

According to MacColl, the drawing was produced ‘in the neighborhood of’ Gisburne Park, in the Ribble Valley, when MacLaren was drawing-master to a daughter of Lord Ribblesdale.[5] Unfortunately, no available information links the other sitters to the Gisburne locality. While the swiftly pencilled representation of each figure indicates a portrait taken from life, it is not possible to confirm whether the grouping was actual, or a composite devised by the artist. It has therefore proved difficult to date the drawing precisely. Based on the appearances of the sitters, it was probably executed in the period 1910–14. Compared to Orpen’s 1909 sketch MacColl, for example, seems to be even balder. Similarly, McEvoy is depicted with a short haircut, whereas in NPG 2556, his dark locks reach past his ears. This difference is documented in other portraits. A chalk sketch by John of McEvoy as a young man clearly shows the long fringe, swept back from the eyes (NPG 3056). In a self-portrait of c.1912, however, this hair has been cropped and sits close against his head (NPG 2790).