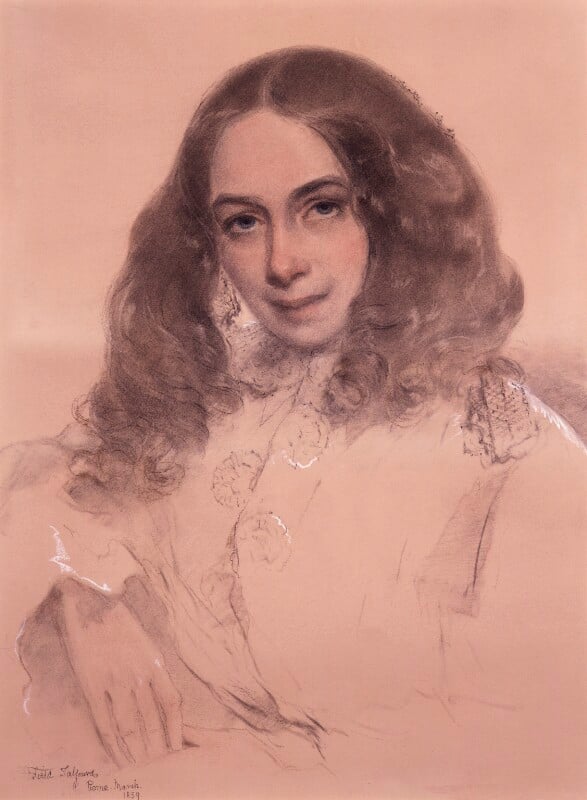 Signed and dated (bottom left): Field Talfourd/Rome. March./1859.
Inscribed on a label, formerly on the back of the drawing: Elizabeth Barrett Browning/Drawn by Field Talfourd-Rome, - 1859./Belonging to, and commissioned by,/Miss Heaton./6. Woodhouse Square./Leeds.

'Tell him [Storm] I shall send him a photograph of Mr Talfourd's picture, if it is at all successful, and he is one of the first of the portrait-artists here. He won't let any one see what is done, but seems confident of not missing the mark.'
She wrote again to the same correspondent on 4 March 1859 (Huxley, pp 312-13):

'A photograph from Mr Talfourd's portrait of me (which has been greatly admired and considered very like by the Roman world) will be sent to you by an early opportunity. It is too flattering - much idealized, in fact - but there must be a good deal of likeness, or it would not strike so universally. As a work of art, it is certainly most beautiful. Don't let me forget to say that the Prince of Wales told Robert very graciously that he had gone to see it - which he did really - and I was very glad, for the artist's sake.'
Miss Heaton commissioned this drawing specifically to rival the portrait of Mrs Browning by Gordigiani (NPG 1899), which had been commissioned by Mrs Eckley in 1858. Both ladies cordially disliked one another, and resented each other's friendship with Mrs Browning. Hence the insistence with which each claimed that she had the best portrait. Mrs Browning herself wrote perceptively to her sister, Arabella, later in the year (McAleer, p 31):

'It is however all made up to me in the Talfourd portrait - for which Miss Heaton gave the commission. She has made herself so unpopular by her ... let me whisper to you Arabel ... by her singular want of refinement & delicacy - & resolution to 'have the only portrait in the world of Mrs Browning' ... dear Sophie Eckley being really wounded by the slight done to herself and her Gordigiani in Florence.'
In a letter to Browning of 18 March 1868 (NPG archives), Miss Heaton wrote that this portrait was ‘nearer to a true representation of her than any other ... You know that I speak of the head in chalk, - for which she so kindly consented to sit, when you were both in Rome in 1859 - to Mr F. Talfourd. – I am glad to know that you approve of this destination for it'. Browning was more cautious, writing to Scharf on 19 March 1868 (NPG archives): 'The portrait is that which I referred to as the best in existence, perhaps'. A copy of the portrait was in the Browning Sale, Sotheby's, 1 May 1913 (lot 5). Four letters from Browning to Miss Heaton, 1868-71, two of them about a photographic reproduction of this portrait, were sold Christie's, 16 July 1969 (lot 112), bought Quaritch.