2 of 53 portraits of Robert Browning 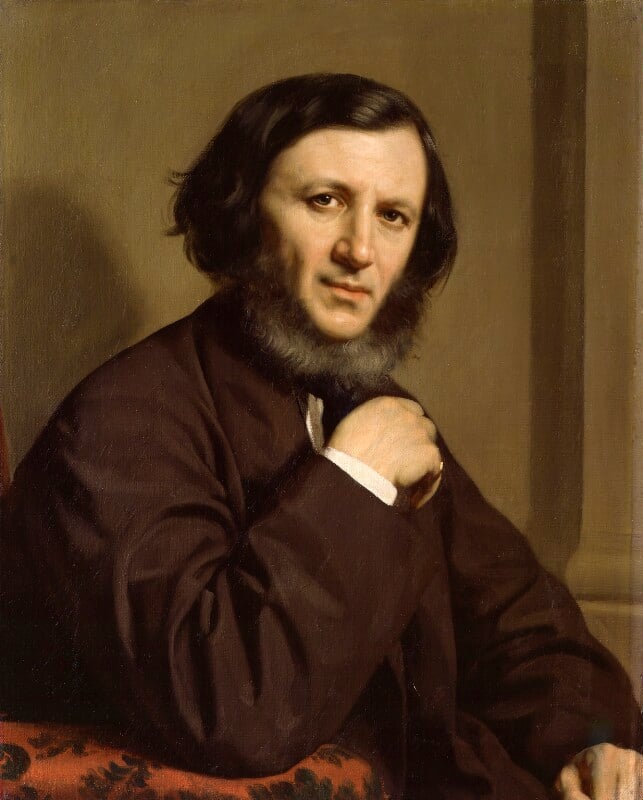 This forms a pair with the portrait of Elizabeth Barrett Browning (NPG 1899, where both portraits are discussed in detail). W. M. Rossetti wrote of it ('Portraits of Browning', p 186):

'The spacious unwrinkled forehead, in which thought seems to have accumulated and condensed; the watchful eyes, slightly over-drooped by their lids; the half-smiling, half-pondering mouth, - Browning's face was, indeed, seldom without a certain lambency, as of pleasant and kindly thought, which would easily lapse into a smile; the whole set of the visage, which seems to be listening, and preparing to reply - all these points are well given, and realize very satisfactorily the impression which the man produced. The face in this portrait is certainly a highly intellectual one; but I think it is treated with too much morbidezza, so as to lack some of that extreme keeness, which characterized Browning.'

Commissioned by Mrs Eckley; bequeathed by her to Browning's son; R. B. Browning Sale, Sotheby's, 1 May 1913 (lot 59), bought Mrs Florence Barclay; presented by her husband, Charles Barclay, in accordance with her wishes, 1921.