6 of 53 portraits of Robert Browning 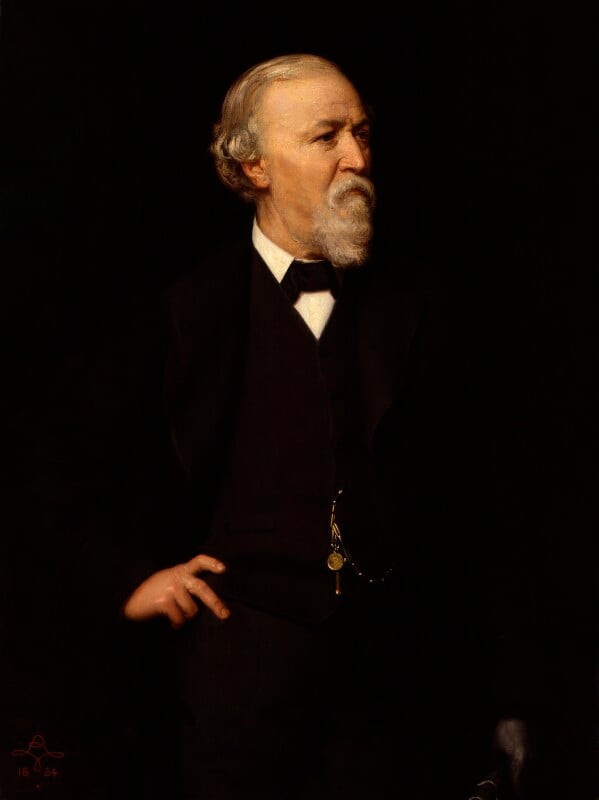 Signed and dated (bottom left): RL (in monogram) 1884
Inscribed on the back of the canvas: Robert Browning/painted by/Rudolph Lehmann/London 1884

This is almost identical in pose and format with Lehmann's oil portrait of Browning of 1875 at Baylor University, Texas (purchased from the Lehmann family, 1946), exhibited RA, 1875 (90). The latter is reproduced in Lehmann's Men and Women of the Century (1896), no.10. According to W. M. Rossetti, both portraits were begun at the same time, the NPG version being finished some years later. Lehmann himself wrote (Reminiscences, p 222):

'I drew him and Mrs Browning in Rome for my Album of Contemporary Celebrities in 1858 [sic] [1]; painted in 1875 the first portrait, in possession of my nephew, R. C. Lehmann; made a second pencil drawing in 1878, now belonging to Mrs Henry Schlesinger; and painted his second portrait, presented by me to the National Portrait Gallery, in 1883 [sic].'
It is clear that Lehmann got further sittings from Browning for the NPG portrait in 1884, as it represents the poet as a much older man than the Baylor University version, although both are almost identical in pose, and were presumably started at the same time (i.e.1875) [2]. Evidence about further sittings is provided by Lewis Hind, who apparently obtained his information from the artist (Art Journal, pp 62-3):

'Browning was an excellent sitter - patient, tractable, and entertaining to a degree. Eight sittings were given for this portrait, and throughout them he talked, always with vivacity, and, apparently never with fatigue. He was no picker of words or subjects, as frank on his own religious beliefs as in a criticism of the last Academy ... When the eight sittings for the oil painting were finished, and the face, hands, and form had grown upon the canvas, Mr Lehmann sent a messenger to the poet asking for the loan of the clothes in which it had been arranged he should be painted. Directly Browning gathered that his beautiful frock-coat would be fitted upon a model and there painted, he started off post haste to Campden Grove, swung into the studio in a whirl of vigour, and thus unbosomed himself "Look here! I'd sooner sit for ever than have my frock-coat put on one of those infernal Italian rascals".'
Another story connected with these sittings is told by the Globe (8 January 1896). Lehmann tried to finish Browning's hands from a model, but 'found that no model's wrist was sufficiently pliable to give the movement he had sketched from the poet's hand. So Browning was summoned again, when he came quite good naturedly as was his wont - although disappointed of his freedom'.

1) Both the drawing of Browning and of his wife were executed in May 1859, and are in the British Museum. They are reproduced in Lehmann's Men and Women of the Century (1896), nos.10a and 11. When Browning came on the drawing of his wife in the artist's studio after her death, he wept. He much preferred the 1859 drawing of himself to the 1875 oil painting, and did not want the latter to be reproduced in Men and Women of the Century. Eventually both were reproduced.
2) The NPG portrait is also distinguished by the absence of a signet ring on the little finger of the right hand, and the addition of a watch-fob to the chain. Browning's watch and watch-chain are now in the British Museum.