8 of 689 portraits by Sir Thomas Lawrence 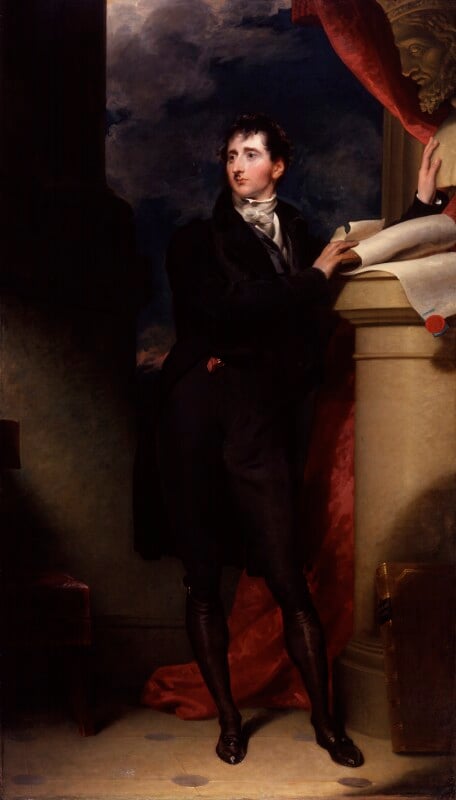 According to Lawrence's executors' list (Kenneth Garlick, Walpole Society Journal, XXXIX, nos.276-7) both this and the companion portrait of Lady Burdett (NPG 3821) were begun in 1793, commissioned by Thomas Coutts whose daughter Sophia married Burdett 5 August 1793 and whose widow and executrix, the Duchess of St Albans, claimed them at Lawrence's death in 1830. J. G. Walker's engraving, published in 1805, gives the owner as Thomas Coutts, confirmed by the Duchess's receipt dated 3 April 1830: ‘... the unfinished portraits of Sir Francis and Lady Burdett painted by Sir Thomas Lawrence at the request of the late Mr Coutts of whose Will I am an Executrix ...’ (MS in V & A library). Armstrong (Sir Walter Armstrong, Lawrence, 1913, p 117) without giving evidence dates them to c.1804 (Sir Francis) and 1809 (Lady Burdett) which may possibly be the dates at which Lawrence stopped work on them.
The executors' list described NPG 3820 as 'head finished figure sketched ... abt I finished rather more', and the companion portrait of Lady Burdett as 'about I finished rather less' (Kenneth Garlick, Walpole Society Journal, XXXIX, p 302). Both portraits were delivered in 1830 and completed, probably by Richard Evans, in 1831. On the back of Lady Burdett's portrait was a label (removed before lining and now in registered packet in NPG archive 3821) written in ink: 'Sophia Lady Burdett Daughter of Thomas Coutts Esq. Painted by Sir Thomas Lawrence PRA in 1807 and finished by Robert [sic] Evans Esq. RA in 1831/copied from back of picture previous to lining'. The demarcation line, diagonally through the waist, between Lawrence's work and that of Evans, is clearly to be seen in both portraits.
An oil replica, head and shoulders only with right hand on copy of Magna Carta, was with Leggatt Bros in 1956 and at Christie's 12 May 1961 (81) bought Wiggins.

Claimed from Lawrence's estate by the Duchess of St Albans, descending through her step-granddaughter Angela (Lady Burdett-Coutts), Burdett's youngest daughter; the Right Hon William Ashmead Bartlett Burdett-Coutts who bequeathed it to Sir Francis Burdett, 8th Baronet, for life and then to the NPG. Sir Francis died in 1951 and the portrait, together with its Lawrence companion of Lady Burdett (NPG 3821), was accepted by the Trustees in 1952.