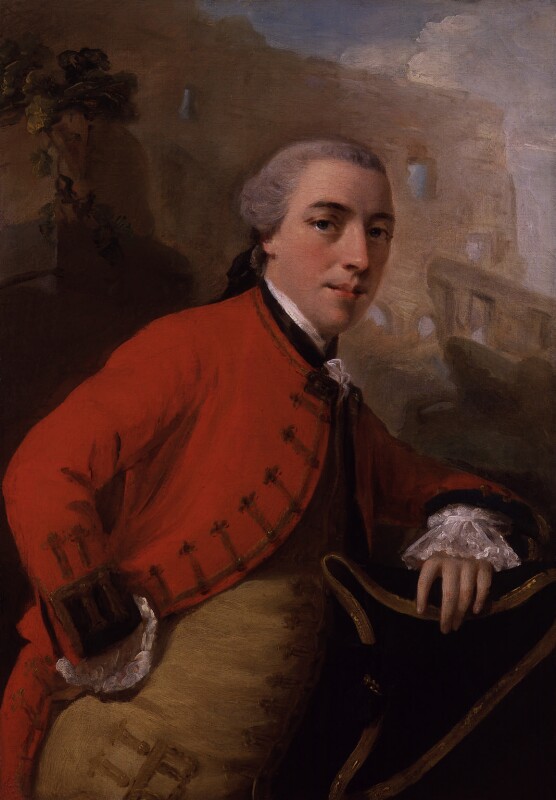 Inscribed in pencil along the top bar of the plain nailed stretcher: Burgoyne[?] Painted by Sir W.Beechey/B 1753 D 1839 and, in ink: Painted by Sir W Beechey; in blue crayon, up the left bar: By Zoffany, and up the right: ZOFFANY; also on the left bar, in chalk, NP[?]R, now barely legible.

Three canvases are now known. NPG 4158; a portrait descended directly from the sitter until presented to the New York Historical Society by Major W. N. Seymour in 1956, [1] and a 50 x 40, signed and dated 1758, recently published by Smart [2] which was formerly in the collection of the late George Pollard Armitage who also owned Ramsay's portrait of Lady Charlotte Burgoyne. The first two are near-identical versions, both roughly 20 x 14 inches. The type was first associated with Ramsay in 1876 when the New York version, then in the possession of Miss Burgoyne, the sitter's grand-daughter, [3] was engraved for De Fonblanque's Life as painted by Ramsay in Rome 1750. [4] This date is not possible, however, either for Ramsay or Burgoyne, as the artist was in Italy in 1754-57 on his second visit, while Burgoyne was there in 1755. In 1956 John Fleming published a letter from Robert Adam in the Clerk papers, written 2 January 1756 in Rome, in which reference is made to a painting of Burgoyne by Ramsay as then 'half done'. [5] Ramsay's related drawing of the Colosseum [6] dated summer 1755, was probably made before the painting was begun.
The sitter's movements are not altogether clear. A niece, Miss Warburton, writing to his daughter on 23 September 1823, refers to the Burgoynes travelling together with the Choiseuls on a tour of pleasure into Italy. [7] But according to Adam, the Burgoynes are reported newly arrived in Florence from Aix, with Mr and Mrs Elliott, not the Choiseuls, in February 1755, [8] Choiseul having probably preceded them to Rome to take up his appointment as ambassador to the Holy See on 4 November 1754. [9] Lady Charlotte Burgoyne is mentioned in a letter of 24 May 1755 as soon to leave Rome; thereafter there is no further mention of their travels in the Clerk correspondence. [10]
Before the Armitage portrait came to light, the New York picture with its direct descent from the sitter had been taken as the prototype. [11] Not only was there Burgoyne's will, with mementos left to his nieces Miss Warburton and Mrs Horton [12] as evidence, but also the former's letter of September 1823 mentioning the portrait taken by Ramsay in Rome 'which Mrs Horton afterwards had'. [13] Neither the New York version nor NPG 4158 carry conviction as autograph Ramsay and both are of a scale, about half life size, which he is never known to have used in oil. Furthermore, these portraits are too weak for an artist who was one of the best draughtsmen and colourists of the century. Of the two, NPG 4158 is marginally better, but it too is surely a copy, though an early one; it is on unlined canvas coeval with the plain, nailed stretcher which antedates the wedged type introduced in the late 18th century. The provenance of the Armitage portrait, implicit in the recent account, [14] is as follows: bequeathed by the sitter to Mrs Horton, i.e. Elizabeth Stanley, daughter of James Lord Stanley (known as Lord Strange) and niece of Burgoyne on his wife's side. Elizabeth married in 1778 the Rev. Thomas Horton, but pre-deceased her husband, 1796. He succeeded his brother Sir Watts Horton, Bart, in 1811 and died in 1831. Their only child Charlotte (named after her great-aunt, Lady Charlotte Burgoyne?) married George Pollard of Stannarry Hall, Halifax, having issue a son George Thomas Pollard, who married Clara née Royds, 31 August 1835. [15] The portrait would have then passed to the Armitage family of Milnsbridge House through the marriage on 30 January 1866 of Joseph Armitage Armitage to Julia Frances (d. 17 March 1923), daughter of George Thomas Pollard; [16] thence by descent. The prototype would therefore have gone to the Hortons c.1792, when copies might well have been made.

1) Major Dawnay tentatively suggests this jacket may be the uniform of the 1st Royal Dragoons.

Unlined, canvas now rather worn and frail; ultra-violet light reveals some retouchings, e.g. in the craquelure on the left side of the face, a worn patch over his left eye and possibly in an area below it; slight losses at the corners and along the edges.