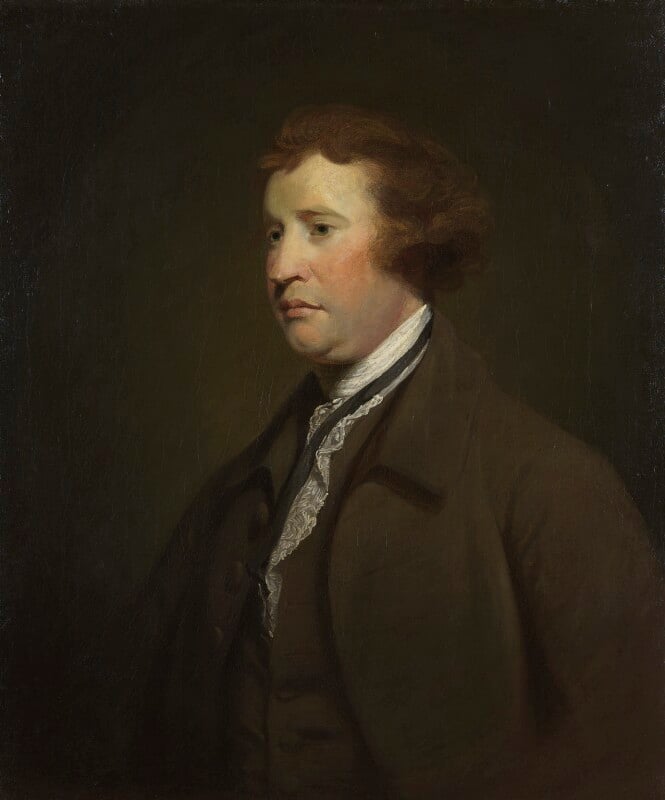 1 A supplier, known to Reynolds, whose business lasted until c.1840. Comparable canvas stamps appear on the canvas used by Opie for his 1792 portrait of Burke (Sir George Scharf's Sketch Books, 92a/21).

A near-contemporary copy of the original Reynolds portrait that was given by the sitter’s widow to the Earl Fitzwilliam (private collection); it was first engraved by James Watson in 1770 and was once described as the best portrait of Burke. [1] When NPG 655 was acquired a second, weaker copy was already in the collection (purchased in 1874; NPG 389); [2] it was lent to the National Gallery of Ireland 1884-1916 and was sold by the Trustees in 1916 to Mrs Walter Hayes Burns, mother-in-law of Earl Harcourt; it was last sold Christie's, 27 October 1961, lot 32.
Other copies include those in the Victoria Memorial Hall, Calcutta (by Edward Dyer); the Bristol Council House, the Palace of Westminster and the Royal Albert Museum, Exeter (both these last once attributed to Northcote). An enamel copy by Henry Spicer, inaccurately inscribed 'from a crayon Pictor painted by Ozias Humphry’, sold Christie’s, 7 November 1988, lot 84, [3] was possibly that exhibited RA 1795 (487). The head from the Reynolds portrait was used in an anonymous engraving showing Burke as The British Cicero, the Magna Charta in his left hand.