22 of 3125 portraits matching these criteria: 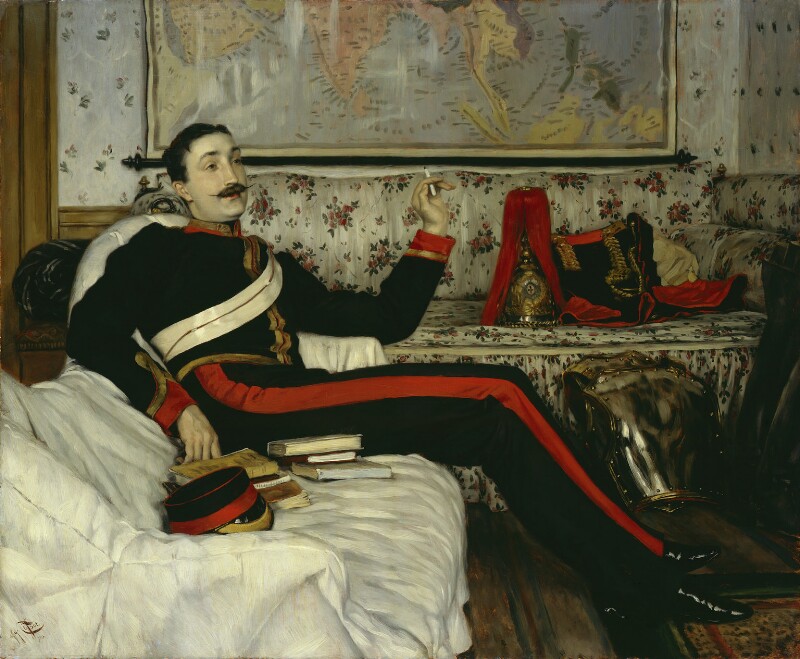 In 1869–70 Burnaby was in his late twenties, a captain in the Royal Horse Guards (the Blues) and as yet renowned only for his physical height and strength and his passion for ballooning; other exploits lay in the future. He had, however, wealth and leisure, and mixed in the social circle of Edward, Prince of Wales. Burnaby’s military duties occupied about half the year, and his daily routine is described thus:

There might be squadron drill on Primrose Hill or at Wormwood Scrubs, or a rehearsal for a state occasion – the trooping of the Colour, the Opening of Parliament, a visit from one of the Queen’s innumerable foreign cousins. After luncheon in the mess or at a club, an hour or two asleep in a deep armchair would be followed by a constitutional canter in the park … During the season the most profound problem of the days was which of the various balls would be the most entertaining to attend … the evening might end with a game of cards and late supper of eggs bacon and beer at Pratts.[1]

He also enjoyed somewhat bohemian company when off-duty and was described as preferring casual, even slovenly civilian clothes. Here, however, he is portrayed as a dashing cavalry officer in what would come to be known as ‘chocolate soldier’ guise, with a waxed moustache and confident air. He wears undress uniform of dark blue with scarlet and gold trimmings and white cross-belt. His cap lies beside books on the sofa, while on a day bed to the right his full-dress uniform is laid out: this comprises a plumed silver-gilt helmet, frogged cape, polished metal breastplate and thigh-high black riding boots.[2]

The composition is articulated round the sitter’s very long diagonal leg, with its wide scarlet stripe, which links with the other scarlet elements of the uniform but whose military allusions are offset by the floral sprigs on the fabric and wallpaper behind the figure. Although the pose renders his torso rather slimmer than the bulky barrel-chested Burnaby commonly appeared, it deliberately draws attention to the choice of a relaxed, informal presentation; rather than the customary full-length standing or mounted military portrait, Burnaby is lounging, with his legs crossed, in what appears a domestic interior, where the comfortable, low sofa, draped in loose white fabric emphasizes Burnaby’s height, as his body occupies virtually the whole width of the picture-space. As Nancy Rose Marshall and Malcolm Warner observe, the picture ‘cleverly blurs the line between formal portraiture and genre painting’ by flouting ‘the pictorial convention that a momentary pose was inappropriate to solemn portraiture’.[3] The artist shows Burnaby holding a cigarette and looking away from the viewer as if in conversation with an unseen companion. By slightly parting the lips beneath the fiercely-spiked moustache, Tissot has suggested an almost audible drawl and depicted his sitter as ‘a suave and irresistible lion of London society’.[4]

The work was commissioned by Thomas Gibson Bowles, a close friend and colleague of the sitter. Burnaby helped Bowles launch Vanity Fair [5] and is credited with suggesting the title (from Bunyan, via Thackeray). The two men shared generally Conservative and imperialist convictions, and Burnaby stood godfather to Bowles’s son George (1877–1955), who inherited this portrait.

There is no extant record of the commission, which was probably conceived sometime during 1869, the year that Bowles met the artist James Jacques Tissot in Paris, and when Tissot’s first celebrity caricatures of European royalty were reproduced in Vanity Fair under the pseudonym ‘Coide’.[6] (Two lithographs and four of his original drawings for Vanity Fair are in the NPG Collection; see NPG collection 2566–2606, 2698–2746, 2964–3012, 3265–3300, 4605–4611, 4627–4636, 4707(1–30), 4711–4758.) To paint Burnaby’s portrait, Tissot ‘must have come to London’[7] and the most probable date for this is November–December 1869, when two portraits of British celebrities attributed to Tissot (of Frederick Temple, future Archbishop of Canterbury, and of Thomas Dundas, 2nd Earl of Zetland, Masonic Grand Master) appeared in Vanity Fair.[8] However, Tissot may have paid another visit to Britain in the early part of 1870, and without further evidence it is only possible to date the portrait’s execution to sometime between autumn 1869 and summer 1870.[9]

The setting is very particularized, but resists identification. ‘Given the fact that he is lounging with crossed legs and smoking a cigarette, activities forbidden to gentlemen in the presence of ladies, we assume that Burnaby is in an exclusively male space’,[10] but the furnishings rather suggest a feminine sitting room; certainly they do not accord with a club or mess-room, nor even a bachelor officer’s lodging. The significance of the large map on the wall behind Burnaby remains unclear, but it depicts ‘the East’ from the Red Sea to Borneo and is roughly centred on Sri Lanka; neither Burnaby nor Bowles was associated with that region, and the artist may have included it either as the existing background to the room chosen for the portrait setting, or in allusion to British military and commercial dominance of the Indian Ocean via the recently opened Suez Canal. The dark item behind Burnaby to the left has been identified as an Arab burnous,[11] such as Burnaby reputedly donned in Tangier in March 1869 in order to secure the services of ‘Moorish dancing girls’.[12] One possibility is that the setting depicts Bowles’s residence (he was as yet unmarried) at 88 St James’s Street, where it is presumed the portrait remained on Tissot’s return to France.

In the autumn of 1870, Bowles went to Paris, remaining there for five months during the Prussian siege, Tissot being among the city’s defenders. Burnaby was unable to leave Britain until December, when he went to Russia for a few months. In the aftermath of war, Tissot moved to London, where as well as illustrating Bowles’s account of the ‘Defense of Paris’, he undertook portraits, Vanity Fair caricatures and costume pieces. He lodged at Bowles’s new home in Queen’s Gate, and then took a studio in Springfield Road, St John’s Wood, from where he sent two genre pieces to the 1872 Royal Academy Summer Exhibition and four works to the London International Exhibition the same summer, including the portrait of Burnaby. This was exhibited within the French section of the exhibition, under the title ‘Portrait of Captain * * *’.[13] Given the extent of the display – 3000 fine art works – critical silence is not surprising, but the Athenaeum’s remarks on one of Tissot’s other paintings may represent the general view of his work. ‘The Thames’, he wrote, ‘has all M.Tissot’s characteristic merits and defects of design and execution and is rather mannered. It is bright, rich in expression, treated with fine feeling for local colour and light as in nature: the actions and expressions are apt, but the drawing is not wholly good. The faces of the girls, which might supply enjoyable elements, are the reverse of pretty.’[14] The Times commented somewhat opaquely on Tissot’s other portrait in the exhibition (of ‘a gentleman clad in furs and sitting in a railway carriage’) that it was ‘as good in its way as his other picture’,[15] which seems to damn with ambiguous praise.

Colonel Frederick Augustus Burnaby [sic] might be called the last of Tissot’s French pictures or the first of his English ones, but it is surely the masterpiece among these little portraits. Strength and silken elegance are combined in a seamless binding of detail which holds the claims of portraiture and genre in perfect suspension. Like the best of Tissot’s works, it distils the essence of its age with flawless instinct. Taking its bold harmony from Burnaby’s uniform of vermilion, black [sic] and white and softening it with pinks, yellows and pale blue, there is a more atmospheric rendering of tone than usual, and it gives added effectiveness to the piquant colour. The composition, built along the long vermilion stripe of the uniform, skilfully suggests Burnaby’s great height and has much of the relaxed yet tensile strength of the sitter himself. Painted with technical delicacy and brio, it is one of Tissot’s most felicitous performances.[16]

A compatriot of the artist, however, saw humorous or satirical elements in the depiction, describing it as ‘fort comique, représantant un colonel d’artillerie anglaise, lustré et propre comme une figure di cire’.[17] To William Gaunt a century later, Tissot had ‘imparted something of the French idea of a typical Englishman’.[18] The picture may be compared with Tissot’s portrait of Algernon Moses Marsden (1877; Old House Gallery, Oakham), resting an arrogant elbow on a tiger skin, and the full-length of politician Chichester Fortescue, Baron Carlingford (1871; Oxford University, OP27).

The painting appears to have been out of the public eye during the lifetimes of Burnaby, Bowles and Tissot, and is not mentioned in Wright 1908. It was acquired from Bowles’s son in 1933 and when exhibited later the same year was described by The Times as ‘a very pleasant work, an interior with a seated figure rather than a portrait, with a great deal of detail controlled by a certain sense of style’.[19] Reproduced apparently for the first time in Laver 1936, the sitter was described as ‘the redoubtable Colonel [sic] … just back from his adventures in Spain and Tangier, which he had described in a series of letters to “Vanity Fair” … His features, as can be seen from the portrait, were Jewish and Italian and his “unEnglish appearance (says the Dictionary of National Biography, with unconscious humour) led him to resist attempts to obtain portraits of him.” That he allowed himself to be painted by Tissot is therefore a proof of the close connection of both men with Bowles, who must have brought them together.’[20] When reproduced in 1938 in connection with a book review the painting was captioned ‘The Ouida Guardsman’.[21]

To John Russell Taylor in 1984, the now-familiar painting, of Burnaby ‘lolling negligently, the picture of élégance militaire off-duty, gives off unexpected resonances which make it seem (especially if compared with superficially similar Sargents), vividly and unexpectedly modern’.[22]

Andrew Wilton in 1992 linked Tissot’s portrayal of the lounging figure to works by Gainsborough, ‘but instead of using the informality of the pose to undercut the rhetoric of the picture, he allows the long, elegant rhythms of the figure to establish their own rather grand presence, making us aware of the superiority of the sitter, both social and physical…’.[23]

As one of the most striking and popular 19th-century portraits in the National Portrait Gallery, as evidenced by its exhibition record, it has effectively kept Burnaby’s reputation alive.

Treasures from the National Portrait Gallery, five venues in Japan, 1995–6 (28).

Sunday Times, 19 June 1938, as ‘The Ouida Guardsman’ (flipped), accompanying a review by John Betjeman of Yvonne ffrench’s Ouida: A Study in Ostentation.