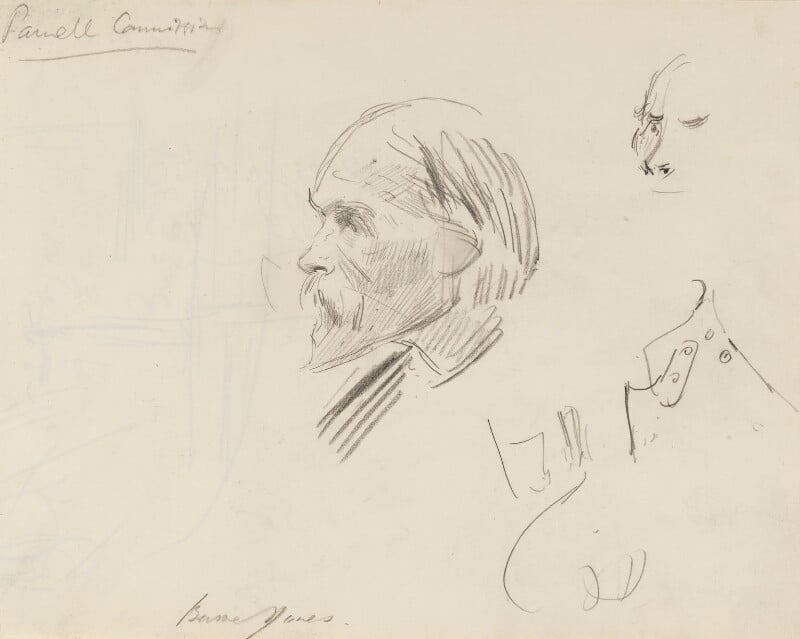 This swift sketch was made during sittings of the Parnell Commission, the judicial inquiry into allegations that Charles Stewart Parnell MP had condoned the political assassination of two senior British officials in Dublin in 1880 (the ‘Phoenix Park murders’). The Commission opened at the Royal Courts of Justice, London, in September 1888 and became the event of the season, attracting many observers, including Frederic Leighton (NPG 2262) and Oscar Wilde (NPG 2265). Hall sketched most of the participants and witnesses for the Graphic, as the paper’s official artist. [1]

At the invitation of his good friend Sir George Lewis (see NPG 2292 and NPG2299), who was Parnell’s instructing solicitor and played a key role in unmasking the forgery of the incriminating letter, Burne-Jones went ‘once or twice’ [2] to the inquiry, and was present in February 1889 when the forger was cross-examined (see NPG 2234). As the illustration based on Hall’s sketch was published on 20 April 1889, he probably also heard the main speech in Parnell’s defence that month. [3] ‘If I were an Irishman I would stand by Parnell through thick and thin,’ he wrote to a friend; [4] and after Parnell’s death he commented, ‘God knows what he was really like, but I saw him in court and watched him the day long: he was like Christ.’ [5]

The engraved version of Hall’s portrait differs from NPG 2287 in showing the sitter’s shoulders and right eye, and a jacket very similar to that worn in the Elliott & Fry cabinet photo (see ‘All known portraits, Photographs, c.1885’), suggesting that Hall elaborated his quick sketch for purposes of publication. It was captioned ‘Sir E.Burne-Jones, A.R.A’. [6]

Sydney Prior Hall was a leading reportage artist who joined the Graphic soon after its launch in 1869. According to the Art Journal, his drawings of the Parnell Commission were his finest achievements in graphic journalism: ‘he was in court the whole time, busy with a swift revealing pencil which missed no turn of affairs’. [7]

The drawing was included in the large collection of portrait sketches (NPG 2227–2390), including dozens from the Parnell Commission, presented to the National Portrait Gallery by Hall’s son.

Head only, profile to left.

With the artist; given with other sketches by the artist’s son H.R.H. Hall, 1929.