5 of 24 portraits of Sir Edward Burne-Jones 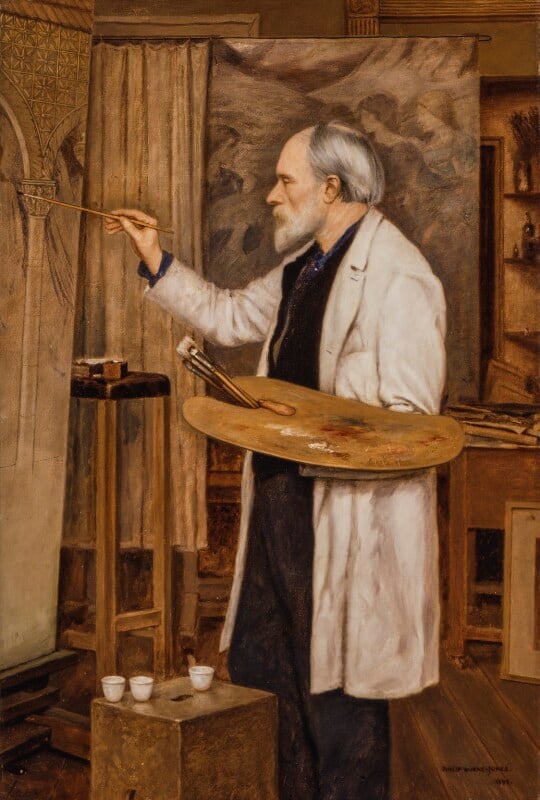 Painted by his son at the very end of the sitter’s life, this portrait shows Burne-Jones at work in his upstairs studio at his home The Grange, North End Road, West Kensington. Sittings began in September 1897 [1] and work was completed by early 1898, when the sitter observed that it was ‘most like the old man, busy at his work and out of mischief for the time’; [2] and ‘very like this old man … he has figured me painting away’. [3]

Burne-Jones found the pose tiring [4] and the portrait may well have been prompted by his declining health from heart disease. His widow recalled that ‘there were signs that age had heard of him and was seeking for a way to touch him …. He seemed to live more and more within himself.’ [5] Hence, perhaps, the stiffness of the pose, as if the sitter were immobilized like the figures in his own Briar Rose / Sleeping Beauty sequence. While all his life Burne-Jones’s colouring was ‘extremely pale … with the paleness that belongs to fair-haired people’, [6] the tonalities of the present work combine the grey hair of age with the off-white painting coat to suggest an almost ghostly memorial, enhanced by the treatment of the accessories in virtual grisaille.

The painting on the easel is a composition for The Attainment, one in a series of five Holy Grail tapestries first woven by Morris & Co. in 1893–5. [7] Although there is no evidence that Burne-Jones began an oil version of The Attainment, the image of a round-arched baldacchino is seen also in two other Grail designs: a series of stained-glass panels (1885–6) for Burne-Jones’s house at Rottingdean, Sussex, and a title-page illustration for The High History of the Holy Grail, edited by Sebastian Evans (1898).[8] As in 1896 he exhibited an oil version of another of the Grail subjects, [9] painted with a sober, restrained palette, it is reasonable to suppose that here the artist has shown his father at work on a canvas which he was intending to paint.

The picture in the background is an unfinished oil of Perseus and the Sea-Nymphs, or The Arming of Perseus (1877; now Staatsgalerie Stuttgart); it is visible in a view of the studio drawn two days after Burne-Jones’s death. [10]

Despite his high reputation from the late 1870s, by the end of his life there existed few formal portraits of the sitter, the most significant being the oils by George Frederic Watts (1870) and Alphonse Legros (1868–9) (see ‘All known portraits, By other artists’), both of which depict Burne-Jones full-face and, in the case of the latter, looking rather ‘severe and sombre’. [11] His son’s portrait by contrast shows him not as a ‘great man’ with the beard of a biblical prophet but as a working painter absorbed in his task.

Educated at Oxford University, Philip Burne-Jones exhibited at the Grosvenor and New Galleries, later specializing in landscape and portraiture and developing a distinctive type of small portrait of which this is the first example. Two companion works are NPG 1863, of Rudyard Kipling (the artist’s cousin), and NPG 1951, of Sir Edward Poynter (his aunt’s husband); the latter is comparable in format and tonality to the present work. The father–son relationship between sitter and artist was sometimes difficult, owing to the former’s fame and the latter’s liking for high society. In the opinion of his niece:

Philip Burne-Jones was a very unhappy man. He could have been a distinguished painter and would have been one under a luckier star, but two things told fatally against him. He never needed to work and he was cursed with a sense of diffidence and a feeling that whatever he did would be contrasted unfavourably with his father’s work … He had a genuine gift for landscapes and had made a style of portrait painting which was peculiarly his own, using canvases about 30 inches by 20 and painting his sitter in three-quarter length. The portrait of his father which is now in the National Portrait Gallery is the best possible example of his gift for these little likenesses. My grandfather is standing in his white studio coat working at a large canvas with the look of patient concentration that came upon him when he was creating. The likeness is perfect and the whole atmosphere of the painter is reproduced with loving mastery. [12]

Exhibited at the Royal Academy shortly before the sitter’s death, the portrait attracted brief attention from The Times. [13] Although apparently commissioned by the sitter’s friend Charles Eliot Norton of Harvard University, [14] it must have been retained by the artist and his mother. The NPG first expressed the wish to acquire it in autumn 1898, when Watts’s portrait of the sitter was promised to Birmingham Museum and Art Gallery; NPG director Sir Lionel Cust wrote to Philip Burne-Jones to ask ‘whether there was any chance of your ever being willing to deposit in this Gallery the excellent little portrait, which you painted of your father in his studio’. He continued, ‘It is obvious that your father was one of the first men of his generation to deserve a place in this Collection.’ [15] In response to this request, the portrait was presented to the NPG after the death of Georgiana Burne-Jones in 1920.

With sitter and his widow to 1920, when presented by their son, the artist.