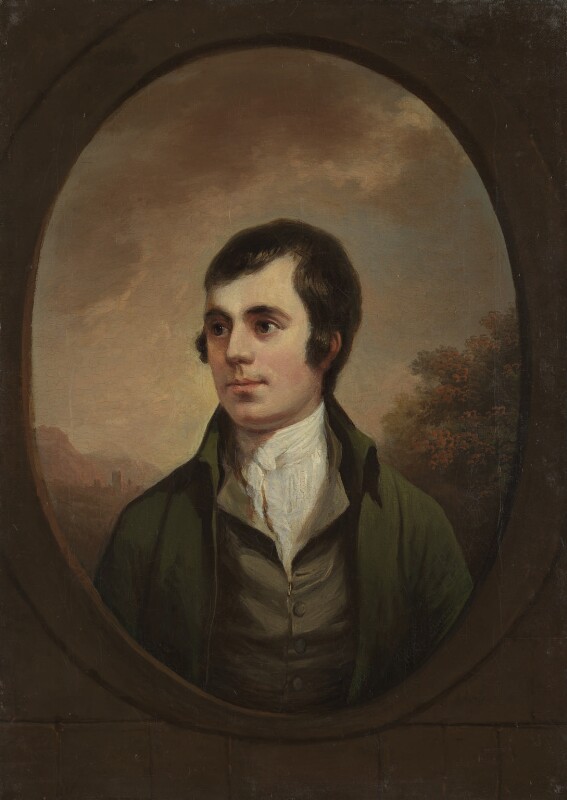 A copy by Nasmyth of a portrait he painted early in 1787, now in the Scottish National Portrait Gallery (PG 1063) and inscribed Painted from Mr Robert Burns by his friend Alexr. Nasmyth, Edinr. 1787. It had been commissioned by the Edinburgh publisher William Creech, to be engraved by John Beugo for Burns’s Poems Chiefly in the Scottish Dialect published on 21 April 1787 and Burns recalled sitting ‘half a dozen times’, [1] for the portrait. Nasmyth, a landscape painter who shared Burns’s radical disposition, had undertaken the commission reluctantly and it was said that the portrait 'was never entirely finished’ since he was ‘afraid to proceed any further, lest he should spoil it'. [2] Beugo received further sittings for the engraving, which was under way in February 1787. [3] His plate was particularly admired by the poet’s brother, Gilbert, who once considered it ‘showed more character and expression than the picture itself’, although he allowed that the Nasmyth was ‘certainly a pretty good likeness’. [4]
Two Nasmyth copies, NPG 46 and the picture now in the Glasgow Art Gallery (generally known as the Auchendrane portrait, from the residence of its first owner), were apparently made some thirty years later. Both show minor differences (‘fortuitous vagaries’, Skinner termed them), apart from slight variations in horizons, clouds and trees. The overall handling of NPG 46 is somewhat coarser (e.g. in the hair, the flesh tones and the shadows around the eyes) and shows a dark green, instead of a dark grey, coat and a plain grey, instead of a striped silk, waistcoat. The Glasgow version has a more vividly striped waistcoat and different buildings on the left; it is inscribed, apparently by the artist:

'... by Alexander Nasmyth being one of three pictures painted by him. The original picture painted by him in Edinburgh in 1787 is now in the possession of Mrs Burns, Dumfries [Scottish National Portrait Gallery], the second is in the possession of George Thomson, Edinburgh, 1824 [NPG 46] and this picture is in the possession of E. Cathcart Esquire-Edinburgh [Glasgow Art Gallery] A.N.1824.'
NPG 46 was painted for George Thomson, from September 1792 the correspondent of Burns concerning songs for Thomson’s Select Collection of Original Scotish Airs (5 volumes, 1793-1818), and after the poet’s death a less than scrupulous editor of his contributions and correspondence. The circumstances of the commission were recalled by James Nasmyth, the artist’s son:

'In the year 1820 it was determined by many of the Chief Citizens of Edinburgh to have a Public Dinner in Commemoration of Burns - and as it was well known that the only authentic Portrait of the Poet was that which my Father had painted of him, and given by him to Mrs Burns, my Father was requested to ask her for the loan of the Portrait ... Thomson was most anxious to possess a Portrait of the Poet and got Mrs Burns permission to allow my Father to make a copy of his own picture while it was under his charge. My father made the copy accordingly and the Portrait of Burns now in the National Portrait Gallery is that copy.' [5]
But it seems that Thomson had not received his copy in October 1821, since he was then trying to borrow the original Nasmyth from Mrs Burns as a model for Flaxman and Stothard to copy. [6] Thirty years later, at the age of ninety-three, Thomson asserted that his portrait of Burns was ‘the best extant’, and for an intriguing reason:

'It is a duplicate painted by Alexander Nasmyth from the one he painted from the life for the poet’s family; but my duplicate had the peculiar advantage of passing through the hands of my kind and highly-talented friend Sir Henry Raeburn, [7] who, on my solicitation, did me the great favour of revising and retouching the face in my own presence, and gave much of that lustre to the eyes which I well remember in the living man, and upon which I could not help gazing during the only day I ever had the pleasure of dining in his delightful company at Mr James Simpson’s, the bookseller.' [8]
Thomson’s son, William, alleged that it was ‘at my Father’s suggestion’ that Nasmyth had ‘consented to its being touched upon and finished by Sir Henry Raeburn’. [9] These accounts of course agree with the modified inscription on the verso of NPG 46 and the portrait was duly catalogued between 1859 and 1866 as by Nasmyth and Raeburn. [10] But the participation of Raeburn seems unlikely or irrelevant, as Scharf in 1889, Gray in 1894 and Skinner in 1963 made clear. [11] It would do him no credit, but it cannot be disproved (and since he died in July 1823, his intervention would also bear on the date).
Raeburn had previously copied the original Nasmyth portrait. In 1803 he had been commissioned by the publisher Thomas Cadell to make a copy ‘of Burns the poet, from the original portrait painted by Mr Nasmyth’, and his copy was delivered early in 1804. [12] An engraving of Burns ‘from an original Picture by Raeburn’ was advertised by Cadell in 1823 as having been ‘lately published’ in the 1820 edition of James Currie’s Works of Burns, but that engraving is lettered W. T. Fry after Nasmyth; it shows Burns in his striped waistcoat and looking a little more wistful and with his hair rather more compact than in the 1787 portrait. [13]
Nasmyth’s portrait became the standard image of Burns and copies abound. Nasmyth himself produced a whole-length variant in 1827-28. An apparently contemporary version, allegedly descended from the poet’s mother (known as the Swinton portrait), now belongs to the University of Edinburgh. [14] David Allan’s drawing of The Cottar’s Saturday Night of 1795 (National Gallery of Scotland, D 961) included an adaptation of the Nasmyth head which was much admired as an incidental likeness. [15] Skirving, who never met Burns, made an attractive red-chalk copy of the head (Scottish National Portrait Gallery, PG 745) which was elaborated in an engraving by Paton Thomson in 1798. [16] After Burns’s death the portrait was constantly engraved for successive editions of his works, the more important plates being by Edward Mitchell, Paton Thomson 1805, and William Walker and Samuel Cousins 1830 (this last particularly admired by Nasmyth, who thought it ‘more true & lively remembrance’ than his own painting). [17] Such prints facilitated duplication by painters who included the artist’s daughter Margaret Nasmyth, John Cowan, Henry Harwood, John Gilfillan and Stewart Wilson.

1 On 17 June 1851 he wrote to the Edinburgh bookseller W. F. Watson concerning the sale of his ‘Portrait of Burns, painted jointly by Nasmyth and Sir Henry Raeburn’ (National Library of Scotland, MS 587, ff.16-17).