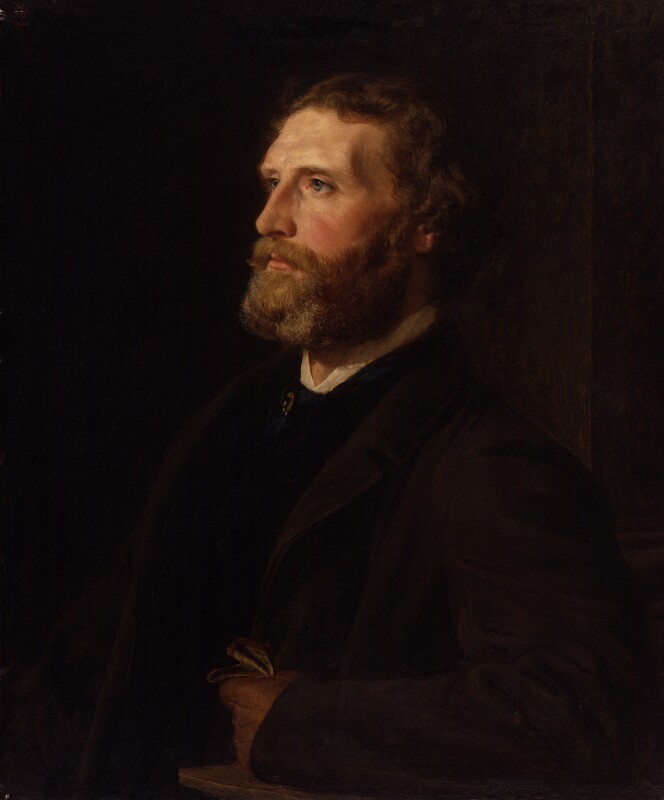 In his late forties, Burton is shown as a handsome man with vigorous light brown hair and beard, dressed in dark jacket and coat and leather gloves. [1] Already a respected member of the Old Water Colour Society, in the year of this portrait he was at work on Hellilil and Hildebrand (The Meeting on the Turret Stairs), [2] which would be well received in 1864, and was elected to the Society of Antiquaries. The work appears to have been prompted by friendship rather than any particular event, however, and although sitter and artist mixed in similar artistic circles, they do not seem to have been especially close.

The artist Henry Tanworth Wells worked as a miniaturist until around 1861, when he transferred his practice into full-scale oil portraiture. His first exhibited work in this genre was a portrait of Lord Ranelagh, leading figure in the Volunteer movement. He may have known Burton through the Artists’ Rifles, as well as via the short-lived Hogarth Club, of which Burton was a member, along with Wells’s brother-in-law George Price Boyce and many other artists in the Pre-Raphaelite circle.

As the work was neither exhibited nor presented to the sitter, it may have been executed as a practice piece. A widower with three young children, Wells had a later career that encompassed many presentation male portraits. Here, the strongly delineated half-length profile pose and the framing, with left arm resting on a table within an undefined interior, evoke the Renaissance mode often adopted for formal portraiture in the later nineteenth century.

In 1900–1 Wells executed a replica, showing the same pose without the hand, measuring 740 x 610mm and signed with a monogram lower left. This he presented in 1901 to the National Gallery of Ireland, Dublin (517). The original remained in Wells’s studio until his own death, when it was inherited by his surviving children, who presented it to the National Portrait Gallery a decade later. They wrote: ‘some years ago [we] put aside a portrait of the late Sir Frederick [sic] Burton, director of the National Gallery, thinking it both a good work and the portrait of a rather interesting personality.’ [3]

1) As his right arm had been paralysed in a childhood accident, Burton painted with his left hand, which is that shown in this portrait, in what may be a tactful allusion to his disability.
2) Now NG Ireland, Dublin, this is a large, bright watercolour with a medieval setting, somewhat in the style of D.G. Rossetti.
3) Letter from Alice Street to C.J. Holmes, 3 June 1913, and associated correspondence, NPG RP 701.