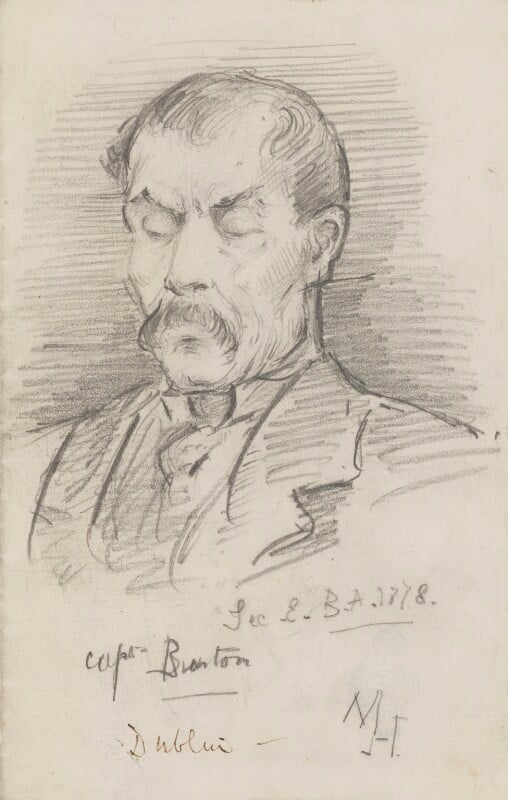 This portrait was drawn in Dublin, during a meeting of the British Association for the Advancement of Science in August 1878.

Burton, officially British Consul in Trieste (Austria-Hungary) had recently returned from an expedition to Midian (Arabia), mapping and prospecting for precious minerals. He arrived in London on 27 July 1878 and left on 12 August for Ireland, where he delivered lectures on Midian’s geography and ethnology on 19, 20 and 21 August, followed by a paper on Ogham and the Arabic ‘Tree Alphabet’ or Mushajjar, delivered on 23 August at the home of lawyer and Ogham scholar Sir Samuel Fergusson.[1]

The artist, Marion Huxley, later Marion Collier, was then aged 19, daughter of scientist Thomas Henry Huxley. She had recently recovered from near-fatal diptheria, following which the whole family holidayed in North Wales; from there they crossed to Ireland, where her father addressed the BAAS on evolution and received an honorary doctorate from Dublin University.[2] Professor Huxley was not an admirer of Burton’s anthropological approach, and Marian’s thumbnail sketch may reflect Burton’s public reputation as an independent, intrepid adventurer, although the image gives him, at 56, a careworn and far from heroic appearance. It is not clear whether he is reading from lecture notes, or listening to another speaker, although the former would position him better for unobtrusive sketching.

Of other portraits of Burton, this image is closest to that by William Simpson (see ‘All known portraits, Paintings, drawings, sculptures and prints, 1871’), drawn at the Royal Geographic Society on a similar occasion. Other comparable works are Marian Collier’s portrait sketches of Charles Darwin (NPG 3144), E.H. Lecky (NPG 3146) and her father (NPG 3145) and (NPG 3147); all were purchased with the present work from the artist’s daughter Joyce Collier Kilburn (1884–1972).

The artist’s daughter, Joyce Kilburn, from whom purchased 1943.