34 of 462 portraits matching these criteria: 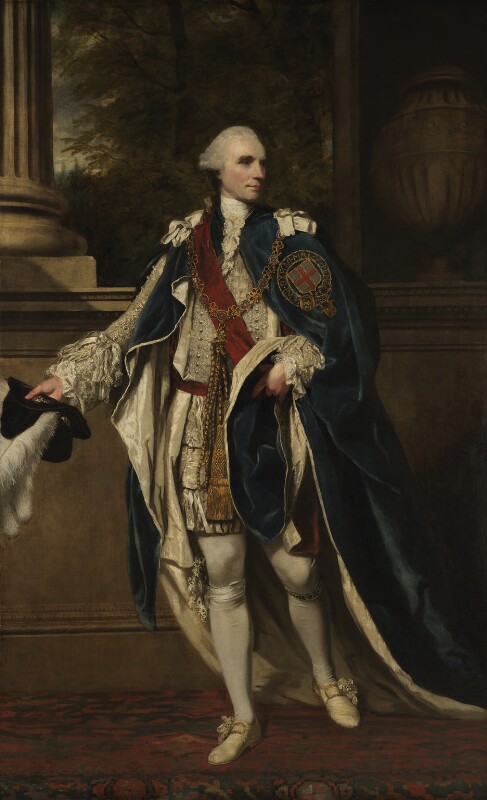 The pose, derived from the Apollo Belvedere, displays Bute’s legs to advantage. NPG 3938 is virtually identical to the Reynolds whole length which remains in the Bute collection, [1] differing only in that the plumed helmet is in his right hand instead of on a table, sky and trees replace an indoor setting, and the floor is carpeted rather than tiled; the execution of the Garter badge is disinterested.
Bute’s name appears in Reynolds’s sitter book nine times between 12 October and 25 December 1773. On 27 October 1773 Northcote, then working in the Reynolds studio, wrote that he was copying Lord Bute’s face ‘as there is to be two whole-lengths made of him’; he goes on:

‘his picture by no means gives me an idea of his character, if it be as the world says. He is a tall genteel figure with a mean Scotch face; his skin very yellow and small blue eyes, with a smile on his face which gives a look of vast good humour and humility. Sir Joshua has made an extraordinary fine head of him. He [Bute] must find it very different from the time when he was forced to have bruisers behind his coach to proptect him, for now he comes in a chair without any servants and often walks home.’ [2]
Payments for two whole-lengths were made by Lord Bute on 25 October 1780. [3] A half-length version attributed to Northcote, with the inscribed date 1780, is also in the Bute collection. [4]

Grey eyes, powdered wig, wearing the robes of the Garter, the plumed bonnet in his right hand.

By family descent to the 3rd Earl of Wharncliffe (d. 1953); purchased from his estate with the aid of the National Art Collections Fund 1958.