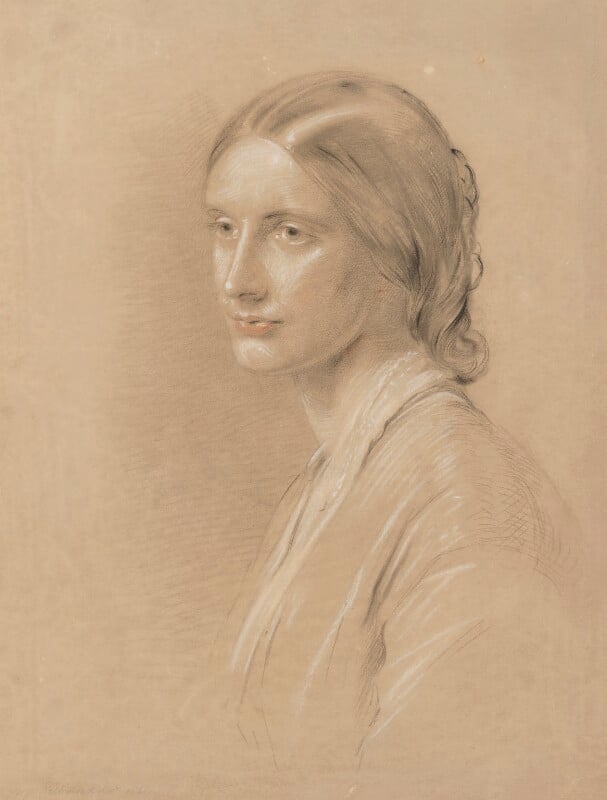 This drawing was commissioned by the sitter’s parents Hannah and John Grey to mark her engagement to George Butler, which took place at the beginning of 1851. In June, aged 23, she travelled from Northumberland to London to visit the Great Exhibition, and portrait sittings took place at Richmond’s studio. ‘Our sittings are very pleasant’, she reported; ‘he is a capital talker & very witty & amusing, & knows all the great nobs, having taken their likenesses’. She added that the portrait was ‘very like’: ‘I was quite startled at first to see such a beautiful picture, but Richmond has a way of taking people at their very best without exactly flattering them. He has made it look so graceful.’ [1]

According to her sister, ‘Josey looks so pretty just now. She gets a kind of rich glowing colour, and her eyes look lustrous, with light dancing in them.’ [2]

The fee was 30 guineas, Richmond’s standard price for a half-length pastel drawing. His account book index records receipt of 30 guineas for the portrait of ‘Miss Grey’ in 1851, [3] and a further 30 guineas in 1853 for ‘Mrs George Butler’. [4] If, as seems probable, the second item is a copy of the present work, no further record of its existence has been traced.

George Richmond was the most prolific and popular portraitist in pencil and pastel at this date; over 40 such works are currently in the National Portrait Gallery collection, together with engravings of many more. From 1836 to 1854 he made likenesses of several members of the Grey family, Josephine’s paternal relatives, as well as those of Northumberland neighbours such as the Trevelyans and Swinburnes. Moreover, thanks to his portrait of William Wilberforce (NPG 4997), Richmond was favoured by many who, like Josephine’s father John Grey, were ardent Anti-Slavery campaigners. [5]

He later wrote that ‘the best chalk drawings that I ever made’ dated from around 1853, after which time his increasing oil practice ‘interfered with the simple drawing power on which the head in chalk so much depended’. [6]

The present work is notable for the delicacy of its delineation in conveying the sitter’s fair complexion and giving a soft lustre to her hair. Comparison with a near-contemporary photograph (see ‘All known portraits, Photographs, c.1850’) suggests Richmond slightly modified the jutting angle of her nose. Butler’s gentle meditative expression is achieved through dark, slightly raised pupils. In addition, the drawing endows her with a gravity that seems to foreshadow her moral determination and political commitment. In execution it may be compared with Richmond’s portraits of Harriet Martineau (NPG 1796), Charlotte Bronte (NPG 1452) and Elizabeth Gaskell (NPG 1720); however, these three sitters were drawn as public figures, with publication as engravings in mind, whereas Butler’s likeness was for private consumption, drawn many years before her campaigning role began. It remained in family possession for a century and a half.

It was first published as the frontispiece to Butler’s Autobiographical Memoir (1909). Following its adoption as the favoured portrait for memorials and centenary celebrations in the 1920s [7] it became widely circulated and frequently reproduced, sometimes from copies.

Two copies are known. One measuring 606 x 454mm is in chalks (Women’s Library, London School of Economics, TWL.1998.78). It is attributed to John Douglas Miller and is inscribed ‘Copied by J.D. Miller from a drawing by George Richmond’. It was formerly in the possession of Butler’s husband and given by him to the Right Hon. Professor James Stuart of Carrow Abbey, after whose death in 1913 it was given by Mrs Stuart to the British branch of the International Abolitionist Federation, with the records of which it eventually passed to the Women’s Library. J.D. Miller is known to have copied other portraits by Richmond in the 1880s and ’90s [8] and may have been commissioned by George Butler to execute this copy. The second copy, perhaps made in the 1900s, is by E.H. Odell (Liverpool University Library, Spec. Colls, JB 2 1/2). [9] This less delicately rendered copy appears to have been drawn from photographs of NPG 6482, or the engraved version published as the frontispiece to Butler 1909; it originally hung in the Josephine Butler Memorial House, Liverpool (established in 1920, closed 1972), whence it passed in 1974 to Liverpool University Library. On the centenary of Butler’s birth in 1928, the Centenary Committee of the Josephine Butler Society produced a postcard reproducing this version of the portrait.

As a result of this dissemination, Richmond’s portrait became the premier image of Butler in histories of social reform, despite depicting her appearance many years before her campaigning activity began. It presents an attractive and refined young woman with an implied sensibility to match, an image which was valued in promoting the causes she initiated, otherwise regarded as morally contaminating by association with prostitution and venereal disease.

In its engraved form from Butler 1909 it was the basis for the image in the sequence of ‘Noble Women’ windows in Liverpool Cathedral, designed by James Hogan in 1921 and made by Powell & Sons (later destroyed by bombing and replaced to the original design in 1951 by Whitefriars Studios). In 2011 it was copied as a plaster relief (measuring approx. 600 x 400mm) by Mark Richards, for temporary display in Winchester Cathedral.

The sitter’s family and heirs; the C.G. Butler Will Trust, from whom purchased 1999.