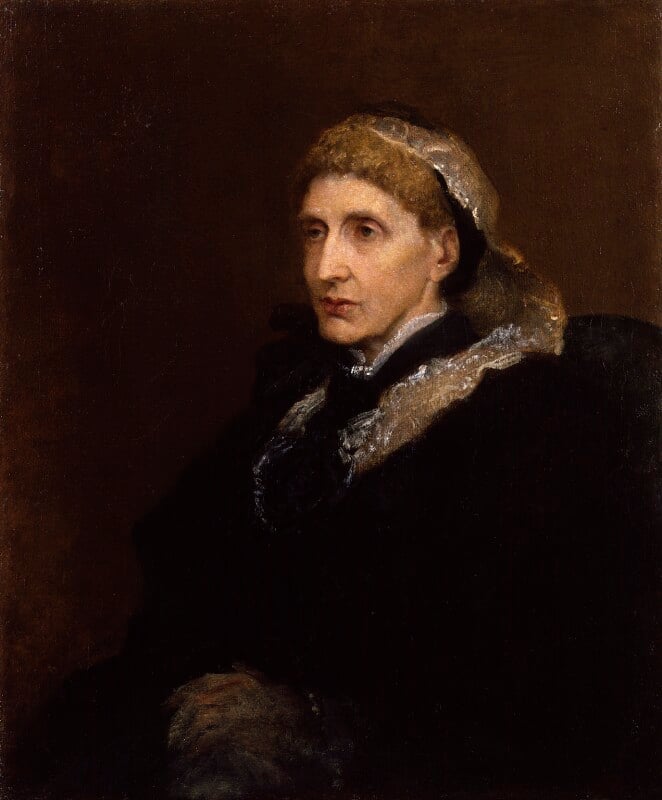 On back of upper and lower stretcher, two name plaques: ‘Josephine Butler’.
On back of frame, label: ‘Watts Exhibition 1905’.

This portrait, one of the latest in George Frederic Watts’s ‘national collection’ or Hall of Fame, was executed from 9 to 13 October 1895, at his house Limnerslease in Compton, Surrey. The sitter is one of a handful of social reformers selected for the series, and her portrait follows those of Samuel Barnett (NPG 2893) and John Passmore Edwards (NPG 3958). Though Watts painted several characterful portraits of old men – notably Cardinal Manning (NPG 1008) – his preference in female portraiture was for youth and beauty. Butler is the only woman to be included in the Hall of Fame series, as a companion portrait of Florence Nightingale was left unfinished.

The first approach was made in the late summer of 1894, when Butler told her daughter-in-law that she had received a request to sit to Watts for a week in October, for the sequence of eminent persons whose portraits he planned to leave to the nation. [1] She was at the time composing her autobiographical Personal Reminiscences of a Great Crusade, and the request was deferred, only to be renewed a year later. Butler told a friend that ‘Mr Watts RA … has been begging me to come to London for week in Oct. in order that he may make a portrait of me for the nation!’ [2] To her daughter-in-law she wrote:

on Wednesday next the 9th [October] I go from Wimbledon to Mr Watts’ place in Surrey. They have asked ‘a friend’ to go with me, so Mia [Maria, another daughter-in-law] is going for a few days, to read to me while I am being painted. I dislike being done. I get so dazed and sleepy, & want to get free; but I will try & behave so as to make it easy for Mr Watts. What he told George [Butler’s eldest son] is that he wants to leave to the nation some portraits of people who have ‘made the century’, whatever that may mean. Uncle George [Grey, Butler’s late brother] would have been pleased, for he admired Watts greatly as a draughtsman. [3]

Both artist and sitter were now elderly – Watts aged 78 and Butler 67 – and found the sittings arduous. On 10 October Butler reported:

It is very cold & dull, & I have a difficulty in sitting three hours at a time in the Studio, wh tho’ warmed, is a very large lofty room. The cold makes me find it difficult to keep awake.

Mr Watts is 80, like a small refined wizard – worn & thin, with snowhite [sic] hair & beard, a black skullcap & a graceful dressing gown & slippers, and a fine aquiline face, very intellectual & thin. It is wonderful to see that small worn old hand doing such bold drawings. He sits a long way from his easel, & uses no hand rest, but works so freely. His hand must be very steady. He is a dear old man, & so gentle. He says he has got on so far very well with the portrait, but he won’t let Mia or me look at it. His wife is much younger than he is, & is very nice, & takes immense care of her ‘old darling’ as she calls him. He is very delicate but he says he hopes to live to do his best work from now before he dies! He has immense sympathy with the poor & working people & is leaving a Gallery for them. I don’t know what he knows about the work I have done, but he spoke to me alone, in a curious sad & self-reproachful tone. He said he had never been able or wakened up [sic] to try to do good to unhappy people, till he was 70, & said ‘what would I not give to be able to look back upon such a life as yours?’ he does not flatter in the least, but seemed troubled. I said I did not take it up willingly, I was driven into it by anger against injustice etc. he replied ‘O yes I know you were driven into it, you were destined for it, but some people refuse to be driven, & you did not refuse’ He said at 70 he gave up all painting for money, & has never taken a penny since, & that he really was often hard up, till now, in order that he might paint pictures that might teach – such as his ‘Pride on the White Horse’ from the Revelations ‘[sic] and “Love & Death”, & he has painted about 40 portraits without pay, for his intended People’s gallery. I am the only woman he has yet painted. I think he & his wife have read Father’s life. [4]

When the sittings were complete, Watts showed the work to his sitter. The emotional impact was intense and before leaving Limnerslease, Butler wrote to express her response:

My dear Mr Watts, I want to tell you in writing what it is difficult to say in words. When I looked at that portrait which you have just done, I felt inclined to burst into tears. I will tell you why. I felt sorry for her. Your power has brought up, out of the depths of the past, the record of a conflict which no one but God knows of. It is written in the eyes and in the whole face. There were years in which my revolt was, not against man, but against God; my soul went down to hell, and dwelt there. It was a woe which has left its marks, long after peace had been restored, just as an old tree bears the marks of a storm by which it was blasted long ago altho’ the weather is so calm now that not a leaf stirs.

Your picture has brought back to me all that I suffered and all the sorrow through which the Angel of God’s presence brought me out alive. I thank you that you have not made that poor woman look severe or bitter, but only sad, and yet purposeful. For with full purpose of heart she has borne and laboured, and she is ready to go down into Hades again, if it were necessary for the deliverance of her fellow-creatures. But God does not require that descent more than once. I could not say all this aloud. But if the portraiture speaks with such truth and power to me, I think it will in some way speak to others also. Yours gratefully, Josephine E. Butler. [5]

(Quoting this letter, Mary Watts remarked that in old age Butler’s face ‘bore but too plainly the marks of an heroic crusade’. [6] But the descent into hell Butler refers to here was the accidental death of her only daughter in 1864, aged five.)

After her return to London, Butler reported again on the experience of sitting to Watts:

It was rather tiring sitting for the portrait, but Mr Watts is really a very loveable old man. He is so full of thought, & a good deal of sadness, but is gentle and easily cheered. He was so anxious about my portrait that it made him almost ill, when at last he let me see it, he looked at his wife, & then at me & then at Mia, with such an anxious face to see what we would say. I don’t know what to think of it. It is rather terrible. It bears the marks of storms & conflict & sorrow so strongly. The eyes are certainly wonderfully done, you know I have no brightness in my eyes now. He said he wanted to make me looking into Eternity, looking at something wh no one else sees, because he says I look like that & he certainly has given that idea. It is not at all pretty, & the jaw & head are too strong and gaunt. I don’t think my friends will like it. But then he is not doing it for us, as he says, but for posterity; & no doubt it will convey an idea of my hard life work. It is not finished. They say his pictures are seldom liked at first, but that they grow on people, on account of the power in them.

It is a marvellous thing to see that small old right hand of his, all blue veins & bones & so thin, poised for 3 or 4 hours at a time, in such unfaltering steadiness, making bold sweeping lines, or the most delicate touches. He sits a long way off his easel, & uses no hand rest or Mahl stick, & never seems tired in his hand, his right arm stretching out all the time. I remarked on it, & he took a glass of water & held it at arm’slength [sic] & there was not the smallest movement in his hand or the water. He never takes any stimulant, & lives much by rule but in brain & body he gets very tired, & often lies down. He talked to me a great deal while lying down. When we were coming away, I kissed Mrs Watts, who was most kind to us, & Mr Watts held up his old face so meekly to be kissed also, very much as dear father used to do. Indeed, in many old man ways, he reminded me of father – a sweet courtesy & modesty, not a bit of boast about him. There is a humble Christian spirit in him. I pray God to give him more hope and light. [7]

The work is painted on very coarse-weave fabric resembling hessian, not a support usually chosen by Watts but occasionally used around this time, as for example with his portrait of the 1st Marquess of Ripon (NPG 1553). As was customary, all pictorial attention is given to the face, while body, clothes and background are sketchily delineated. Butler wears a dark dress or bodice with lace collar and cuffs and a black cap under lace with long streamers, as worn by widows in the mid-Victorian years; a similar cap with a long scarf-like veil is seen in portrait photographs taken by Elliott & Fry around 1890 (see ‘All known portraits, Photographs, 1890s’).

According to one of Butler’s biographers, the portrait is ‘a shockingly grim study, stark and spare … her face has the pallor and rigidity of a corpse, and stands out from a darkly obscure background. Her folded hands are faintly suggested by broad brush strokes, and her heavy mourning dress is offset only by a simple strip of white lace pinned to the head and falling upon her shoulders.’ [8] This judgement is supported by the Ormonds, who write: ‘There is a gaunt and tragic quality to Watts’s characterisation of Josephine Butler. She stares out of deep-sunken eyes, with the lines of nose and jaw strongly emphasised … her bony, unfinished hands are clasped across her lap and a bracelet is faintly indicated at the cuff.’ [9]

The portrait remained with Watts’s widow and Gallery until the centenary of Butler’s birth, when it was loaned to the National Portrait Gallery for exhibition. [10] In 1935 it was formally transferred to the Gallery under the terms of Watts’s bequest.

Bequeathed by the artist, in keeping of his widow until accessioned 1935.