4 of 37 portraits of Lord Byron 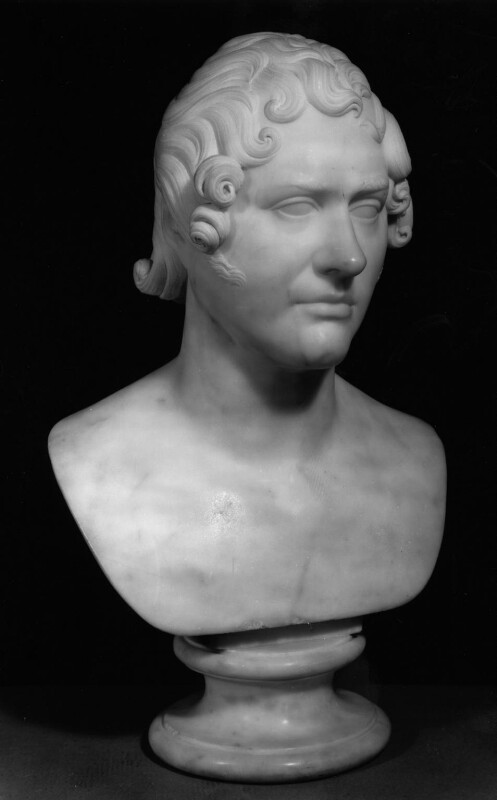 Incised on the back in small sloping letters: Bartolini

Bartolini is said to have written to Byron in October 1821 asking for sittings and for permission to present him with a bust (R. R. Langham-Carter, 'The Bartolini Busts in the South Africa Library' in Quarterly Review of the South Africa Library, XXV, December 1970, p 45). Byron agreed provided he would also make a bust of the Contessa Guiccioli. Certainly on 3 and 4 January 1822 both Williams and Medwin found him sitting to Bartolini who is recorded as dining with Byron on 16 January (D. L. Moore, Byron: Accounts Rendered, 1974, p 268). Thomas Medwin, (Conversations of Lord Byron, 1824, p 6) says that 'Bartolini destroyed his ébauches more than once before he could please himself and that Byron himself said 'it is the last time I sit to sculptor or painter'. This is confirmed in Byron's letter to Murray 6 March - 'Bartolini, the celebrated Sculptor, wrote to me to desire to make my bust: I consented on condition that he also took that of the Countess Guiccioli. He has taken both, and I think it will be allowed that Her's is beautiful. I shall make you a present of them both, to show you that I don't bear malice, and as a compensation for the trouble and squabble you had about Thorwaldsen's. Of my own I can hardly speak, except that it is thought very like what I now am, which is different from what I was, of course, since you saw me. The Sculptor is a famous one; and as it was done by his own particular request, will be done well, probably'. After some delays - 'The busts which you enquire after have been long paid for, but are not even begun. Bartolini is famous for his delays, something like yourself’ (letter to Murray 16 May); the busts were finished but neither Byron nor Teresa liked them. Teresa said they were 'affligés' and Byron said of his own 'the bust does not turn out a very good one, though it may be like for aught I know, as it exactly resembles a superannuated Jesuit ... I assure you Bartolini's is dreadful, though my mind misgives me that it is hideously like. If it is, I cannot be long for this world, for it overlooks seventy' (letter to Murray 23 September). And again from Genoa, 'You shall have the busts ... but West's picture of me for the New York Academy is preferred to Bartolini's bust of me done at the same time at the request of both artists, for I had resolved to sit no more for such vanities' (letter to Murray 24 October 1822).
Leigh Hunt seems to have agreed with Byron: 'very dissatisfied he was with it. He said it made him look old and could not bear anybody to think it like' (J. Leigh Hunt, Lord Byron and some of his Contemporaries, 1828, p 213). Other commentators were less emphatic. Medwin thought it 'an admirable likeness, at least was so in the clay model. I have not seen it since it was copied in marble, nor have I got a cast; he promised Bertolini [sic] should send me one. Lord Byron prided himself on his neck; and it must be confessed that his head was worthy of being placed on it' (Thomas Medwin, Conversations of Lord Byron, 1824, p 6 note). J. G. Lockhart agreed; 'Lord Byron's head', he wrote, 'is without doubt the finest in our time - I think it better on the whole, than either Napoleon's, or Goethe's, or Canova's, or Wordsworth's.' (Lockhart, Peter's Letters to his Kinsfolk, 1819, II, p 338).
Byron's dislike of the bust may have been connected with worry about his weight. Since 1818 he had been growing heavier until by 1822 Leigh Hunt says 'upon seeing Lord Byron I hardly knew him he was grown so fat ... altogether presenting a very different aspect from the compact, energetic and curly-headed person whom I had known in England' (Leigh Hunt, Lord Byron and some of his Contemporaries, 1828, p 15).
The NPG bust, being the only one Bartolini actually signed, though inferior to a pair in the South Africa Library, Capetown, is possibly the original. Bartolini was thought by his countrymen to be 'second only to Canova' but in England he was considered worthy but slightly second-rate, exporting quantities of marble copies to London at 20 guineas each. 'There is no sculptor of eminence at Florence. Bertolini is an excellent workman and takes admirable likenesses, and if he were employed less in this way might exceed in original composition. It is now the fashion among the English to sit to him ...' (Henry Matthews, Diary of an Invalid, 1820, Sunday 7 December 1817). The pair in Cape Town show both Byron and the Contessa in Roman drapery and are more polished and complete (R. R. Langham-Carter, 'The Bartolini Busts in the South Africa Library' in Quarterly Review of the South Africa Library, XXV, December 1970).
Another pair was bought by the Contessa on a visit to Bartolini's studio with the Earl of Malmesbury in about 1846 and a copy of the Byron bust was found by the Marquise de Boissy also in the studio; the Contessa gave or sold her Byron bust to Lord Malmesbury whose descendant sold it at John D. Wood & Co in 1950; its pair of herself is probably that formerly belonging to the Conte Carlo Gamba. Another version belonged to the Earl of Westmorland (envoy in Florence 1814-30) whose descendants sold it in about 1902. A small marble version was in the Lady Blessington sale 7-26 May 1849 (580), possibly that now in the R. Holland collection (photograph in NPG). A plaster which could conceivably be the original modello is in the Palazzo Pitti, Florence (Antique Collector, July 1974, p 59). Byron changed his mind about presenting a pair to John Murray, possibly because of a cooling of relations between them.

Dr Bell who brought it from Italy in 1827; the sale of his effects and bought by Dr Clay of Manchester whose daughter Mrs Emily Jourdain sold it to the NPG 1904.

Small stipple by R. Cooper, profile to left, published by Colburn 1824, and lithograph by an unknown artist published by Hunt 1824.