17 of 31 portraits matching these criteria: 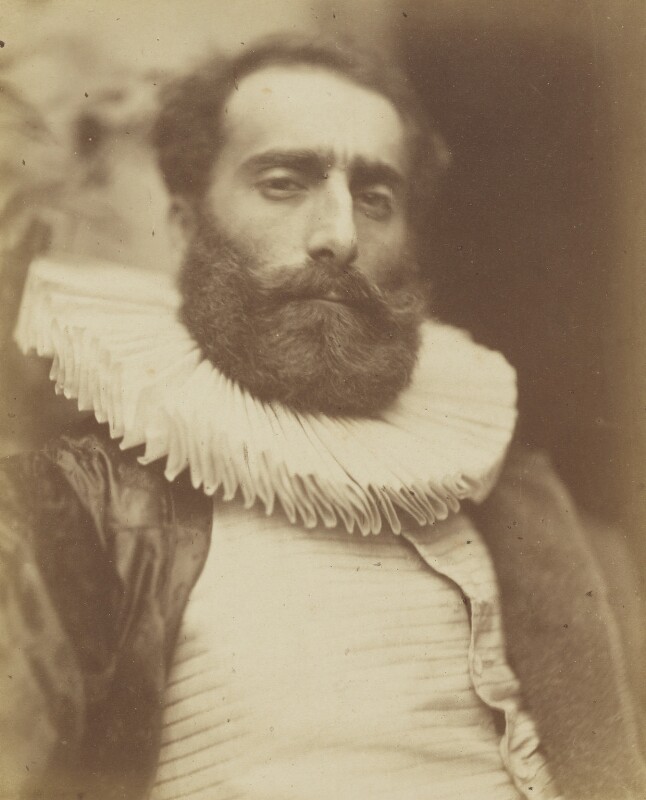 This image was registered by Wynfield for copyright on 8 December 1863, when it was described as ‘Photograph of P.H. Calderon in Vandyck costume, bust, nearly full face’. [1] It was published in March 1864 in Part 1 (‘After the Flemish and Dutch Schools’) of The Studio: A Collection of Photographic Portraits of Living Artists, taken in the style of the Old Masters, by an Amateur. ‘Quels grands seigneurs!’ remarked George du Maurier of the group. [2]

Calderon wears a pale doublet with horizontal stripes under a darker silk garment and a spreading white ruff similar to that seen in Wynfield’s photograph of J.E. Hodgson (NPG P74). The large pleated ruff is typical of those shown in early seventeenth-century Dutch portraiture and may be compared with Van Dyck’s 1624 portrait of Prince Emmanuel Philibert of Savoy (Dulwich Picture Gall.), while the image overall also evokes the Spanish school with which Calderon was ancestrally connected.

From the early 1860s, alongside Wynfield, Henry Stacy Marks, George Adolphus Storey and others, Calderon was a central figure in the St John’s Wood Clique of artists who met weekly for sketching, mutual criticism and sociability. [3] In summer 1866 Calderon and Wynfield, together with W.F. Yeames, rented Hever Castle, once the residence of Anne Boleyn, which furnished backgrounds for depictions of medieval scenes.