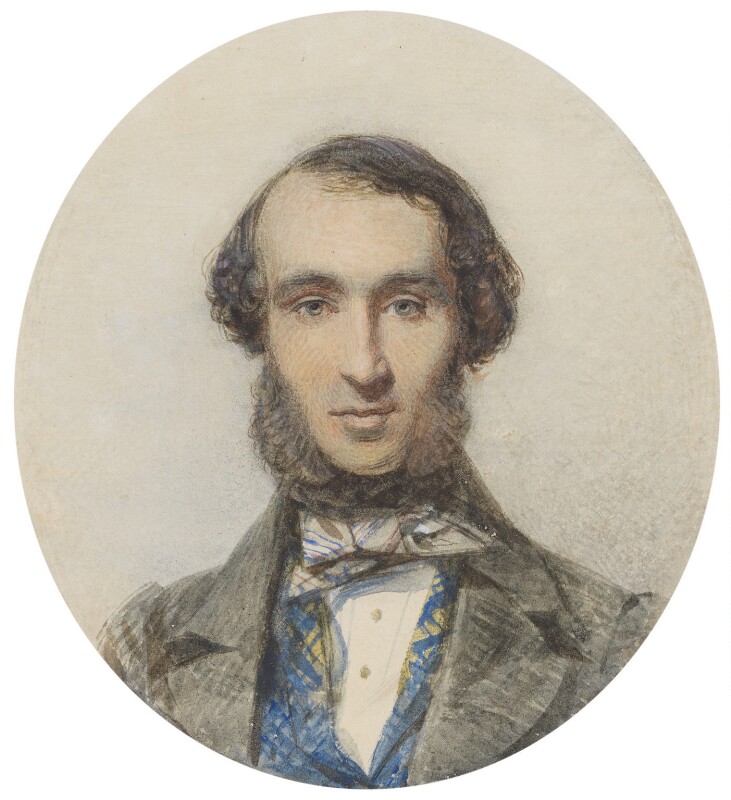 According to the artist’s second wife, this drawing was ‘done in Paris’ where Callow worked between 1829 and 1841; [1] but the patterned necktie with a flat, irregular knot reflects a later fashion, as do the muttonchop whiskers, while the sitter’s receding hairline suggests a man over thirty. These hints combine towards a date of c.1845–55.

The style and format of the work are those of a large miniature and although there is no indication that it was ever so framed, the portrait could have been a ‘keepsake’ type portrait dating from around the time of Callow’s first marriage in 1846. No artist’s name is recorded and the work remained in the family, as the possession of his second wife. The provenance and precise, almost over-careful handling suggest that it may be by his first wife, Harriet Anne Smart (1818–1883), a talented amateur who had been ‘one of his fashionable pupils’ [2] and whose surviving sketchbooks contain ‘crisp little drawings’ with very evenly spaced hatching, as in NPG 2356. [3] The image captures Callow’s ‘tall, handsome’ appearance, and demonstrates the traditional draughtsmanship and watercolour techniques he practised and taught. Reynolds (1980) notes that ‘some unsigned watercolour sketches, attributed to William Callow, have undoubtedly been the work of Harriet Callow. As a pupil of her husband one would expect a similar style, but her fluent manipulation and technical ability were capable of producing work which it has previously been quite sensible to deduce was that of William Callow.’ [4]

Another remote possibility is that it is the work of one of Callow’s other fashionable pupils, for example, Louis Philippe’s daughter Clementine, duchess of Saxe-Coburg, who had lessons from Callow both in Paris and in Britain in the early weeks of 1853, [5] but this is entirely speculative.

In 1929, the National Portrait Gallery’s director Henry Hake visited Mary Callow at home, to discuss the possibility of obtaining either a watercolour or a chalk (see NPG 2937) portrait of the sitter. According to his report, ‘I also saw hanging on the wall of the drawing-room a slight sketch, head 1/8 life-size, of William Callow done as a young man in Paris. I said that thought my Trustees would very much like to have the small sketch as well and so preserve a likeness of William Callow in his youth and old age. Mrs Callow said she thought it could be arranged.’ [6] The work was accordingly presented to the Gallery.