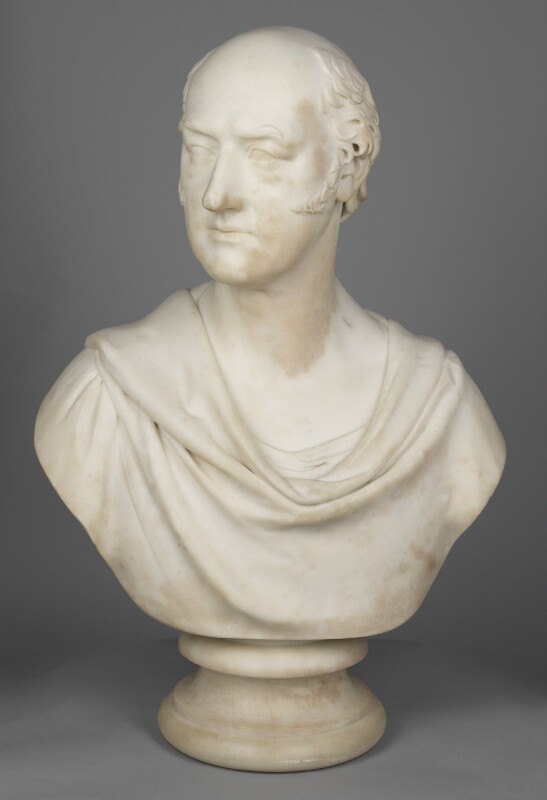 Chantrey's preliminary drawing is NPG 316a(10); this was developed into the plaster model in the Ashmolean Museum (533/21) with slight variations in the drapery, and then to the marble bust commissioned by Mr Bolton for Liverpool (Sir Francis Chantrey’s Ledger of Accounts, p 88), now in the Palace of Westminster, incised: Rt Hon. George Canning 1819; another version, also 1819, is in the National Museum of Wales, Cardiff. Chantrey's second bust (now NPG 282) was commissioned by C. Ellis of 7 Connaught Place in 1820 and paid for 19 March 1822, £126 (Sir Francis Chantrey’s Ledger of Accounts, p 99). His third bust of Canning was commissioned by the Duke of Devonshire in 1827 and is now at Chatsworth; others are in the National Gallery of Victoria, Melbourne (1828), Harewood House (undated), and a posthumous copy with difference in the drapery is at Windsor Castle; a head only belonged in 1869 to the widow of Canning's private secretary, Backhouse.
Chantrey made statues of Canning for Westminster Abbey (commissioned 1829), for Liverpool 1829, for the Duke of Sutherland 1834 (completion of a statue previously rejected and presented to the City of Athens in 1930 by Mr and Mrs Charles Boot).
Medals from the bust were made by Bain exhibited RA 1823 (1039) and by Stothard RA 1826 (980).

Head and shoulders in a toga, head turned slightly to his right.

Lithograph dated 1818, profile to right in coat and neckcloth, and etching by Mrs Dawson Turner from a drawing by Chantrey himself 1821 (in reverse); line engraving by Worthington published by James Ridgway 1828; lithograph by R. J. Lane 1829 (R. J. Lane’s accounts and letters, mainly for lithographic drawings, I, 20).