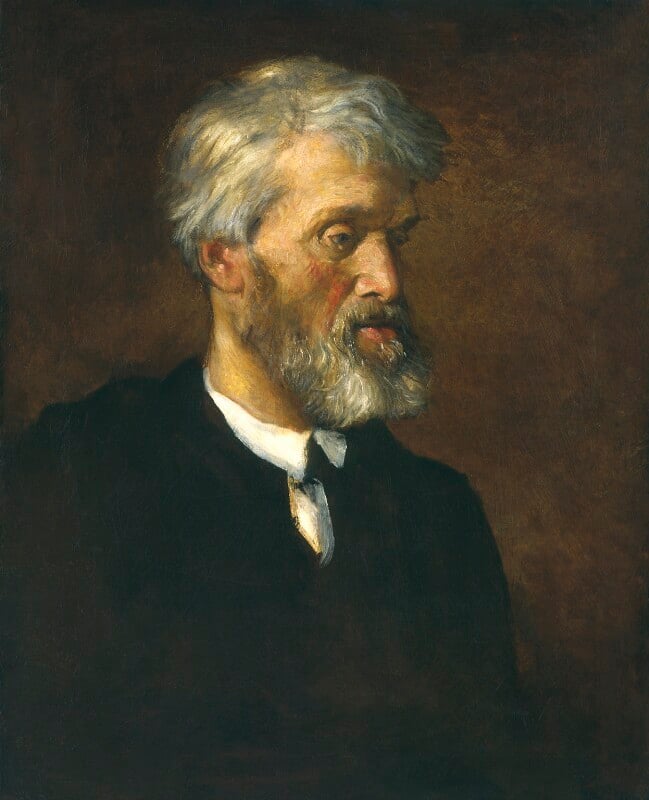 One of three similar versions, the most important of which was commissioned by John Forster, and is now in the Victoria and Albert Museum (F39), exhibited Charles Dickens, Victoria and Albert Museum, 1970 (I35). The third version was rescued from destruction by Mrs Watts, and is now in the Ashmolean Museum, Oxford, bequeathed by Miss K. Lewis (bought by her at the sale following Mrs Watts' death at Limmerslease, April 1939). The NPG portrait is dated 1877 in the various exhibition catalogues in which it appeared, and also by Spielmann (see his letter of 25 June 1927, NPG archives), on the authority of the artist, but it was evidently begun at the same time as the Victoria and Albert Museum version nine years before. Watts frequently worked on his pictures over a period of several years.
Mrs Watts states that her husband began his portraits of Carlyle in 1867, quoting a letter from Carlyle to the artist of 18 June 1867 (M. S. Watts, I, 249-50). This seems to be a mistake or a mis-reading, for Carlyle wrote a letter on 20 May 1868, which contradicts Mrs Watts' evidence: 'On Friday (3 p.m.) I am to give Watts his "first sitting"’. [1] Forster is known to have commissioned the Victoria and Albert Museum portrait in May 1868 [2] and it seems most unlikely that Watts had begun one of the other two versions a year earlier, particularly as the Forster picture appears to be the prime original. On 20 June 1868, Carlyle again referred to the portrait: 'Watts, too, the Painter, has not quite done with me, I fear; and seems to be making a monster than otherwise. Well, well!' [3] Carlyle and Watts did not get on well together, the latter 'in vain trying to open the eyes of the great prophet to the value of art outside the historical record in a portrait' (M. S. Watts, I, 249). Carlyle thought Watts a 'very wearisome, "washed-out", dilettante man, - though an innocent well-intending and ingenious withal' (Wilson and MacArthur, p 168). Carlyle was an impatient sitter, which acted on the nerves of the artist, and inhibited his powers. When he apologized to Carlyle for making him sit so long, Carlyle doggedly replied (M. S. Watts, II, 232): 'I said I would sit, and so I will do so'. This was not a sympathetic atmosphere for Watts, and in self-defence he put curtains round his easel, and refused to show Carlyle what he was doing. [4] By July 1868, Carlyle felt in need of an escape, and he wrote to Watts (M. S. Watts, I, 249):

'Unexpectedly I find I have to go to Scotland in about ten days, and continue there I know not how long. If you do want me again, therefore, let it be within that time, fairly within; I am anxious to neglect nothing for perfecting of our mutual enterprise, in which I see in you such excellent desire after excellence, and shall be ready within the prescribed limits and times, any time at a day's notice.'
The portrait, however, was not finished before Carlyle's departure. Letters from Watts to Forster during the autumn and winter of 1868-9 plead illness, the weather, and fear of disturbing Carlyle, as the reasons for the delay in finishing the portrait. On 7 June 1869, Watts wrote: 'but now the weather is warm I should at once apply for the sittings I have been every day on the point of asking for, but every day hesitating knowing how much Mr Carlyle dislikes the occupation.' [5]
Finally in the autumn of 1869, Watts obtained a few more sittings, and delivered the finished portrait to Forster on 7 November 1869. When he asked Carlyle for an opinion on his work, the latter remarked, after deliberation, 'Mon, I would have ye know I am in the hobit of wurin' clean linen!’ [6] His later comments were more violent and bitter. He complained that he had been made to look like 'a mad labourer', and wrote to his brother:

'Decidedly the most insufferable picture that has yet been made of me, a delirious-looking mountebank full of violence, awkwardness, atrocity, and stupidity, without recognizable likeness to anything I have ever known in any feature of me. Fuit in fatis. What care I, after all? Forster is much content. The fault of Watts is a passionate pursuit of strength. Never mind, never mind!' [7]
Watts himself regarded all three portraits as failures, but other critics were more favourable. Meredith thought the Forster portrait had the look of Lear encountering the storm on the Cornish coast, and Chesterton wrote:

'The uglier Carlyle of Watts has more of the truth about him, the strange combination of a score of sane and healthy visions and views, with something that was not sane, which bloodshot and embittered them all, the great tragedy of the union of a strong countryside mind and body with a disease of the vitals and something like a disease of the spirit. In fact, Watts painted Carlyle 'like a mad labourer', because Carlyle was a mad labourer.' [8]