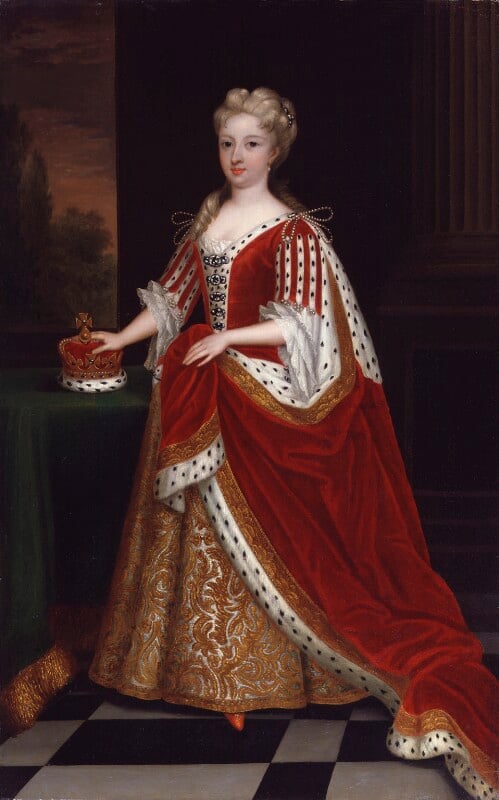 A copy by a hand not far from Charles Philips of the portrait by Kneller, signed and dated 1716, showing the sitter as Princess of Wales. The original is now in Buckingham Palace (Sir Oliver Millar, The Tudor Stuart and Early Georgian Pictures in the collection of Her Majesty The Queen, 1963, 345). NPG 529 closely follows the three-quarter-length engraving by J. Faber junior, even in the misplacement of the cross on the crown, suggesting it was worked up from it. The engraving was re-issued when the sitter became Queen (J. Chaloner Smith, British Mezzotinto Portraits, 1878-83, 62). A life-size version, with the head very near to Kneller, was with the Leger Galleries in 1935 as by Vanderbank, apparently from the Byron collection, Newstead Abbey. It was bought for Robert E. Lee's house in Virginia, USA. Miniatures are at Ickworth [1] and in the National Museum, Stockholm, as by Zincke after Kneller.

Dark eyes, pale eyebrows, narrow nose, blonde hair, centre-parted, to below shoulders; scarlet robes of state over gold-brocaded grey skirt, looped pearls on shoulders, black diamond clasps down front of bodice; a column, right, and left, a table with single arched crown of the Princess of Wales on which she rests her right hand; black and white tiled floor, a window behind, with trees and pink sky beyond.

Surface cleaned three times and varnished twice between 1895 and 1900; examination in 1968 revealed the face and chest badly worn; cleaned, relined and damages below the crown, in the left sleeve and the floor, repaired, 1968.

The original engraved, with variations, by a number of hands (F. O'Donoghue and Sir Henry M. Hake, Catalogue of Engraved British Portraits ... in the British Museum, 1908-25, 8-17) including J. Simon, J. Smith and by J. Faber junior.