3 of 36 portraits of Caroline Wilhelmina of Brandenburg-Ansbach 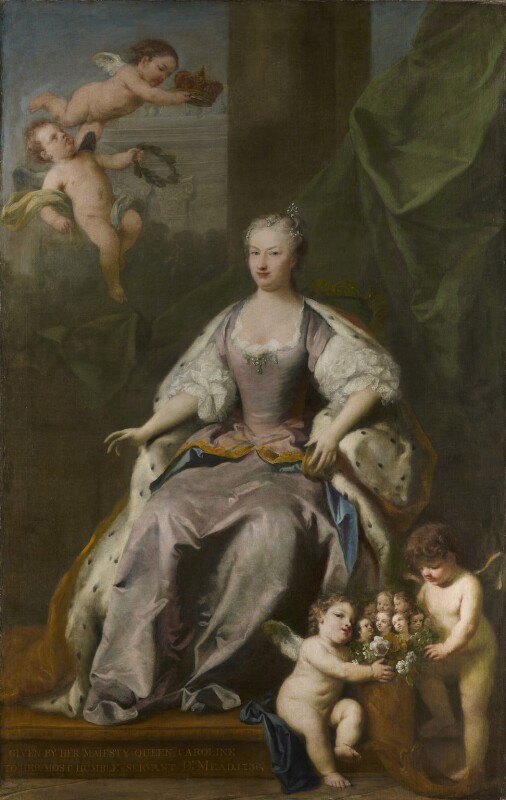 Inscribed on the step of the dais: GIVEN BY HER MAJESTY QUEEN CAROLINE/TO HER MOST HUMBLE SERVANT Dr. MEAD. 1736.

One of two versions paid for by the Queen in 1735: 'To Amigoni for drawing two pictures of Her Majesty whole-length as a present to the Duke of Kent and Dr. Meade.' [1] Vertue also notes in that year: 'Signr. Amiconi finished a picture whole length of the Queen for Doctor Meade. the Queen sat to him for the face.' [2] The other version, still at Wrest Park, [3] has no cornucopia and there is masonry instead of the curtain background. A three-quarter length of the same design belongs to the University of Durham. [4] Vertue refers earlier in 1735, to another type, 'Signor Amiconi a large picture of the Queen and the Duke standing by her. several attributes of honour. and sciences. the whole freely and lively - but neither like nor correct - but of fine glowing colours', [5] a criticism that could equally be made in respect of NPG 4332. The head is surely flattering, making the Queen look like a young woman rather than the mother of seven children.

Losses in the face and chest; fading in the dress; rubbed; discoloured varnish removed; cleaned, retouched and relined 1968.

Bought, 1963, at Paskell and Cann's sale, Colchester, 22 October, lot 288; presented, 1736, to the Queen's physician Mead, and descended through his daughter who married Sir Edward Wilmot, Bart; in the Wilmot family until at least the 'Art Treasures Exhibition', Manchester, 1857 (362) and later with A. F. Jarmin of Bury St Edmunds.

Engraved by Vertue, 1736, [1] three-quarter length, the Queen's face looking much younger, with a medallion of the three Graces, bottom left, and only one putto included; the portrait engraved after Amigoni by A. van Haecken, 1736, does not appear to be related to the NPG type.