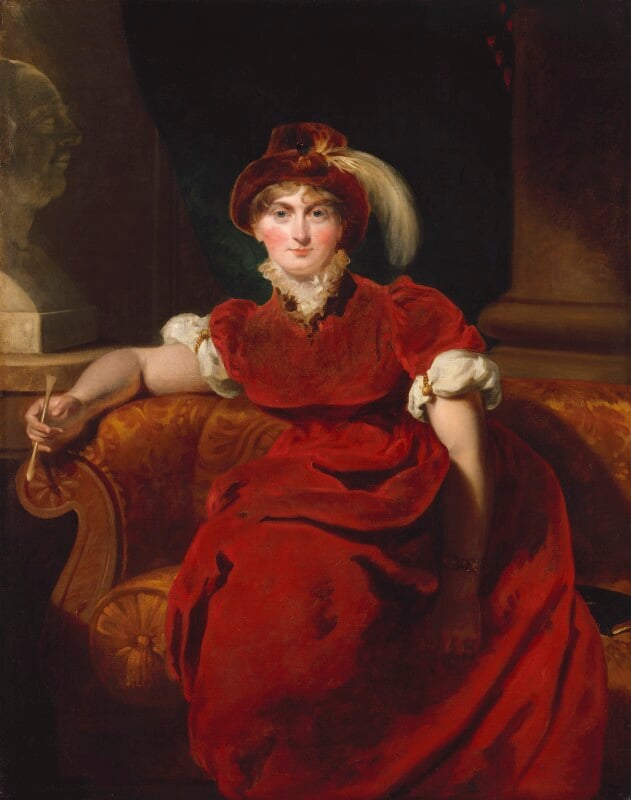 The Princess had already been painted by Lawrence in 1798 (V & A Museum, reproduced Sir Walter Armstrong, Lawrence, 1913, plate IX and (in colour) Connoisseur, December 1912). On 6 September 1804 Farington records Lawrence's immense popularity and the Princess's intention to sit again, for a half-length. She sat for him in November in Greek Street (Farington, Diary, 17 November 1804) where the portrait remained until Lawrence's death and the sale of his effects at Christie's in 1830-31 (Kenneth Garlick, ‘Catalogue of Paintings, Drawings and Pastels of Sir Thomas Lawrence’ in Walpole Society Journal, XXXIX, 1964).
Lawrence's assistant Richard Evans wrote to the Director of the NPG in 1868, shortly after the portrait's acquisition: 'The Portrait of Queen Caroline was painted by Lawrence about the year 1804 and was in my painting room in his house during the time I was his pupil, when she was taking lessons in modelling from an Italian of the name of Turnerelli who lived a few doors below Lawrence's house in Greek St Soho. At the death of the painter it was sent with the other of his effects to Christie & Manson's for sale and I purchased it from thence. Lord Berwick coming frequently to my house at that time saw the picture and nothing would do but that he must have it, so it was sold to him about the year 34 or 35 … I may mention that William Lord Berwick was Ambassador at Naples at the time the Queen returned from her foreign travels. This may account for his wish to possess the picture' (letters from Evans in NPG archive).
The portrait was acquired by the NPG from Berwick's nephew, the 6th Baron, who sold part of the family collection at Christie's in 1864. The modelling tool in her right hand indicates her known skill as a sculptor.

Three-quarter-length seated on a gold-upholstered sofa, in a short-sleeved crimson velvet dress, white ruff collar, plumed hat; fair hair, large blue eyes, rosy complexion; she holds a modelling tool in her right hand above which is a clay bust of her father the Duke of Brunswick; green curtain background, column to right; book and spectacles on sofa right.

View all known portraits for Caroline Amelia Elizabeth of Brunswick