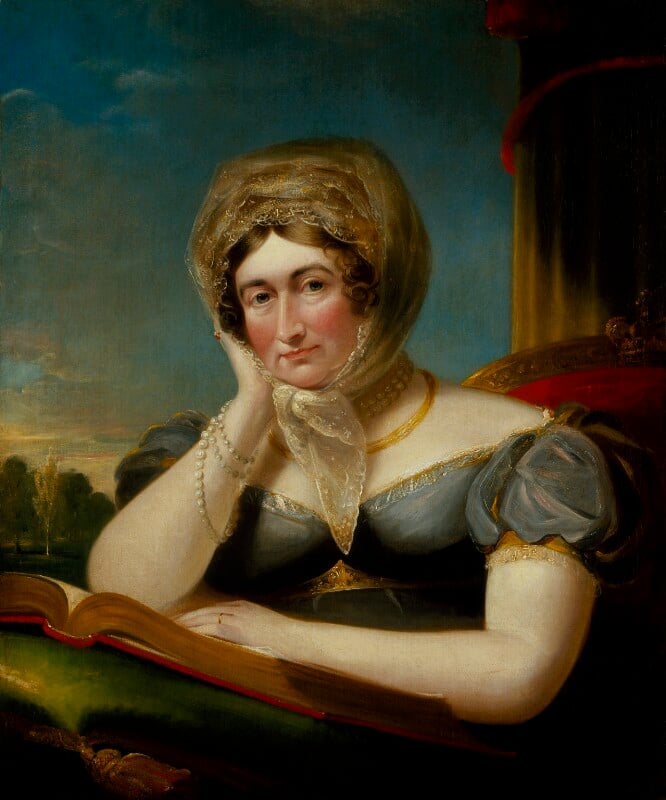 The Queen returned from abroad in June 1820 and a portrait was immediately commissioned from Lonsdale by the Lord Mayor of London. In Meyer's stipple engraving of the portrait, presented by Caroline herself to the City of London on 1 November 1820, Lonsdale describes himself as 'Principal Painter in Ordinary to the Queen', a post he seems to have held since the death of Opie in 1807 (Thieme-Becker). The NPG portrait appears to be of about the same date as the City portrait though more informal and a great deal more revealing. Lonsdale's portraits are serious enough but Farington records a conversation with Constable who said 'Lonsdale had been employed at Brandenburgh House to paint a portrait of the Queen, and gave an instance of her levity. Addresses were read to her and Alderman Wood read her Answers, while she standing behind him made ridiculous faces at Lonsdale & others' (Diary, 8 November 1820).

The artist; his son Judge J. J. Lonsdale who offered it to the NPG in 1873 together with portraits of Brougham (NPG 361), Nollekens (NPG 360) and Congreve (NPG 982f); Brougham and Nollekens were accepted, Queen Caroline and Congreve declined but Caroline appears to have been accepted in 1878.

View all known portraits for Caroline Amelia Elizabeth of Brunswick