1 of 158 portraits matching these criteria: 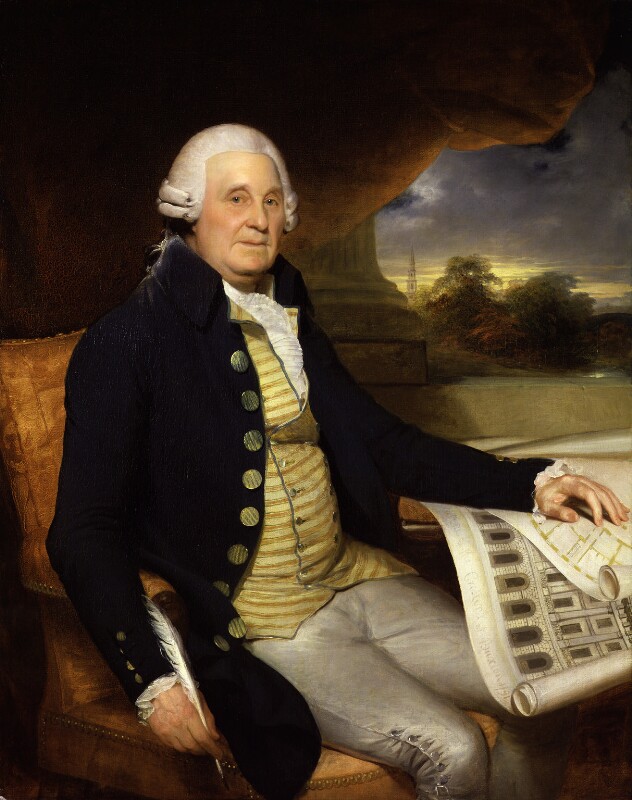 The date 1791 painted on the plan of the Buxton Crescent is probably the date of the portrait (the Crescent having been built in 1779-84). The distant church spire is that of St Peter’s, Horbury, Yorks., which Carr had built in his native village at his own expense between 1790 and 1794 and where he was buried; it does not appear in the engraving by Hodges and was probably therefore an early addition. [1] Ribeiro has observed that although Carr’s dress is fashionable, he is wearing a very old-fashioned wig. [2]
A half-length version in York Mansion House, wearing the mayoral chains of office, was presented to the Corporation by the sitter in 1803; [3] a reduced version is in the Cooper Gallery, Barnsley, and a recent copy by Andrew Festing is in Fairfax House (York Civic Trust).

Pale blue-grey eyes, powdered bag wig, wearing a deep blue-grey coat with gold buttons, a yellow waistcoat with orange and green stripes and silver buttons, white neckcloth; and light nankeen breeches; a red leather chair and curtain. On the table an elevation of the crescent at Buxton and a plan inscribed ... vation of the Crescent at Buxton 1791; in the distance the church at Horbury and autumnal trees.