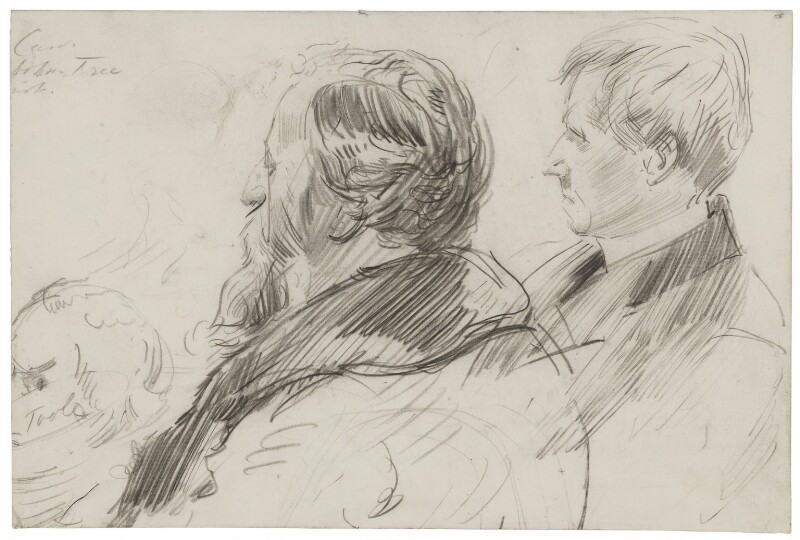 In February 1889, when this sketch of Herbert Beerbohm Tree and Joseph William Comyns Carr (Tree’s partner at the Haymarket Theatre) was made, the Parnell Commission had been proceeding at the Royal Courts of Justice for five months. [1] Sydney Prior Hall – ‘that prince of rapid sketchers’ [2] – was detailed by the Graphic newspaper as its special artist to cover the case, and he attended every sitting of the sensational trial. [3] His sharpened point captured judges, lawyers, politicians, witnesses and, if notable, a number of those watching in the public gallery.

Hall’s captions are integral to the illustrations. When it came to publishing NPG 2263 he merged it with two other sketches of theatrical types, one of Oscar Wilde (NPG 2265) and a complete one of John Lawrence Toole (see below; his head appears to the left here, cut off ), with the punning caption ‘Mr Oscar Wilde, Mr. J.L. Toole, Mr. Comyns Carr, and Mr. H. Beerbohm Tree are spectators of the Commission drama’. [4] Indeed without the caption it would be difficult to identify the clean-shaven profile as Tree (it is not a clear likeness), especially as the actor was then starring as a vast, rollicking Falstaff in The Merry Wives of Windsor at the Haymarket Theatre. [5] On the drawing itself the figures are identified by cut-off inscriptions at top left.

A drawing by Frederick Pegram of Tree and Toole at a Parnell Commission sitting (Victoria & Albert Museum, London, E.595-1952), reproduced in Pictorial World on 21 February 1889, close in date to the publication of NPG 2263, confirms a mid-February date for Tree’s visit to the court.

NPG 2263 is part of a collection of 44 Parnell Commission sketches by Hall, given to the National Portrait Gallery by the artist’s son, Harry Reginald Holland Hall, in 1928; see NPG Portrait Set ‘The Parnell Commission, 1888–9: drawings by Sydney Prior Hall’. It was exhibited at the Gallery in October 1929. [6]

1) The Commission met for the first time 17 Sept. 1888, though the first regular sitting was on 22 Oct.
2) Sala 1896, p.535.
3) ‘Our illustrations of the proceedings of the Special Commission are wholly from sketches by Mr. Sydney P. Hall, who has been in Court throughout the sittings’ (Graphic, Special Commission Number, ‘An Illustrated and Descriptive Record of the Special Commission appointed to inquire into the charges and allegations made by the “Times” newspaper against Irish M.P.’s [sic] and others’, 11 Mar. 1889, p.48).
4) Graphic, 23 Feb. 1889, p.185; see Bridgeman Images LIP1055429. The same group of four was reprinted in the Graphic Special Commission Number, p.30; see Bridgeman Images LIP1055769.
5) See ‘All known portraits, In stage character, The Merry Wives of Windsor, 1889’.
6) Letter from H.M. Hake to M. Tree, 7 Oct. 1929, NPG RP 2263: ‘A drawing of the late Sir Herbert Beerbohm Tree is at the moment on exhibition among the sketches taken by the late Sydney Hall’.

Head-and-shoulders, profile to left, at right of group of three men.