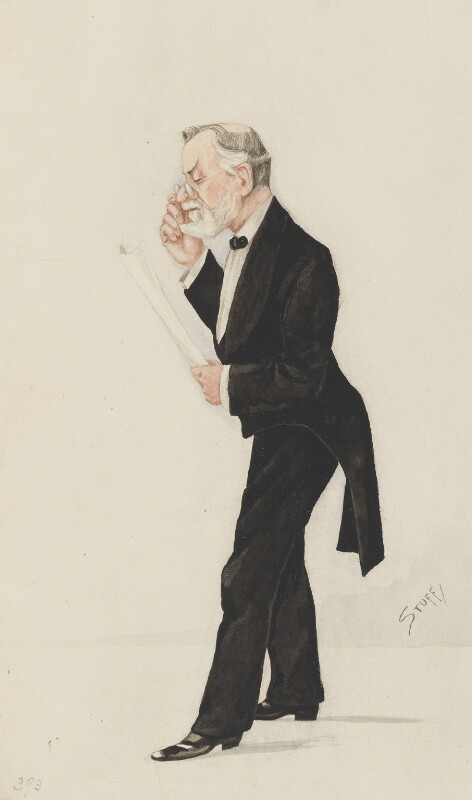 This caricature of Robert Brudenell Carter is the only medical subject drawn for Vanity Fair by Harold Wright (‘Stuff’), lawyer and cartoonist. [1] He drew it in 1892, while a relatively recent recruit to the magazine’s pool of artists: his 23 caricatures for Vanity Fair were published between 1891 and 1900. Carter’s finely delineated head and somewhat puppet-like physique are characteristic of Wright’s figure drawing, as can be seen in his other works in the Collection. [2]

Wright signed ‘Stuff’ (or ‘Stuff Gownsman’ or ‘Stuff G.’), and in the literature these pseudonyms are often mistakenly linked to another artist, the illustrator Henry Charles Seppings Wright (1850–1937). [3]

NPG 3298 was the basis of the chromolithograph by Vincent Brooks, Day & Son which appeared in Vanity Fair on 9 April 1892, an illustration to ‘Men of the Day no. DXXXVI. Mr. Robert Brudenell Carter F.R.C.S.’, captioned ‘“A Literary Oculist”’. [4] Carter’s iconography being small, the drawing is a useful reference to his appearance in later life.