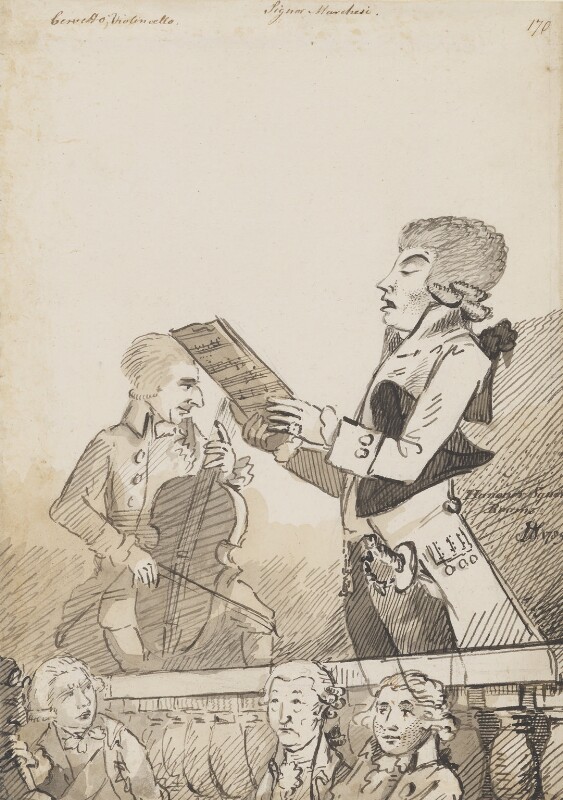 Signed in monogram and dated lower right: JN:1789, and inscribed immediately above: Hanover Square/Rooms; along the top edge, inscribed in a different hand: Cervetto, Violincello and Signor Marchesi and numbered 170.

The inscriptions identify:
Luigi Marchesi (1755-1829), a celebrated Italian male soprano who performed throughout Europe and was in London 1788-90. Nixon’s caricature fully exploits Marchesi’s vanity and affectation, but the likeness may be reconciled with the portrait by Richard Cosway engraved by Luigi Schiavonetti in 1790.
Giacomo [James] Cervetto II (1747/9-1837), an Italian ‘cellist, was a pupil of Abel in London in 1760, and from 1780 played at the professional concerts at the Hanover Square Rooms. His identity seems confirmed by a second Nixon caricature of 1784 [1] and by a drawing of him in old age by A. E. Chalon, dated 1832 (British Museum; 1922.10.17.5); he has also been identified in a Zoffany group. [2]
The old mount is inscribed below in a near-contemporary hand Duke of Cumberland 1791, apparently identifying the left-hand foreground seated figure wearing a (vestigial) Garter ribbon and star as Henry, Duke of Cumberland (1745-90; KG 1767), the rather foolish brother of George III, who was nevertheless musical and owned a collection of musical instruments; [3] the likeness is, however, perfunctory. It has also been suggested that the shadowy profile in the bottom left corner of the drawing evoked Giacobbe Cervetto (c.1682-1783), the cellist’s deceased father. [4]
The Hanover Square concert rooms in London, a joint venture by J. C. Bach and C. F. Abel (who are separately featured in this catalogue) with the Italian dancer and dancing master G. A. [Sir John] Gallini (1728-1805), had opened in 1775; ‘Professional Concerts’, run by Professors of Music, were held between 1783 and 1793.

Cervetto on the left playing the ‘cello, Marchesi on the right, his hat under his arm, foppishly dressed, with a large ring on his left little finger and a sword; in the foreground a ‘cellist with his spectacles on his forehead, and four members of the audience, three looking bored (one wears the ribbon and star of the Garter), and one content.