2 of 8 portraits by John Francis Rigaud 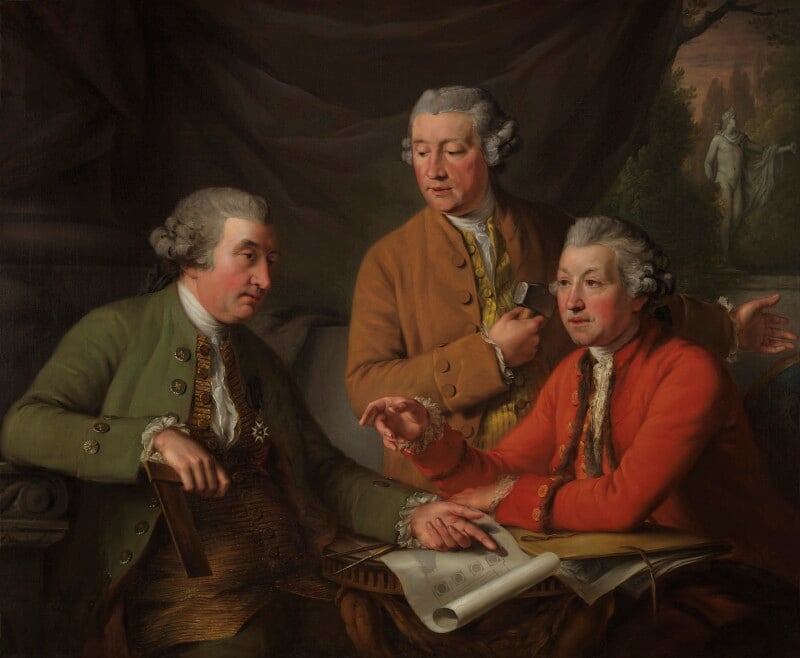 NPG 987 shows, from the left
Sir William Chambers (1723-96): grey eyes, grey powdered wig, wearing the Polar Star on his green coat with silver buttons bearing a gold device; gold brocade waistcoat and grey-green breeches; his right elbow rests on a capital and in his right hand a T-square; he points with his left hand to a plan [1] on which lie dividers.
Joseph Wilton (1722-1803): his dark eyes apparently focused on Chambers’s badge of the Polar Star; grey powdered wig, wearing a sandy-brown coat with matching buttons and a yellow green-striped waistcoat; in his right hand a mallet, his left stretched out towards the distant figure of the Apollo Belvedere. [2]
Sir Joshua Reynolds (1723-92): blue eyes, grey powdered wig, wearing a matching coat and waistcoat of red with gold buttons, trimmed with dark fur; he leans on a folio of drawings and sits in a blue-upholstered chair.
Compared with Rigaud's earlier group portrait of the three Italian Academicians (see NPG 3186), the canvas is slightly larger and the composition more successful. The artist's son explained that NPG 987 was ‘intended as a companion' and was

'a very interesting group of Sir Joshua Reynolds, the first and distinguished President of the Royal Academy; J. Wilton R.A. Sculptor (afterwards Keeper of the Royal Academy;) and Sir William Chambers R.A. Architect, and Surveyor of the Board of Works: They are represented as in conversation, Sir Joshua in the act of addressing his brother artists, with all the gentleness and suavity for which he was so remarkable, thus giving a perfect idea of his countenance, his expression and character.' [3]
He even preferred his father's portrait of Reynolds to the self portrait Reynolds presented to the RA (as a Doctor of civil law 1780), as 'a more true representation of his personal appearance, and his peculiar expression' (the Rigaud head somewhat resembles the Reynolds self portrait of 1773, of which, however, there was no early engraving). Of contemporary reviews the St James’s Chronicle, 2-4 May 1782, agreed that ‘They are strong and expressive Resemblances; but the Integrity which led the Artist to copy so exactly the Vulgarity of the President’s Countenance will not recommend him to his Favour; and he will probably remain some Time longer among the Associates’. But Rigaud was elected RA in 1784.
This uncommissioned picture portraying three senior Royal Academicians (of similar age, eminent representatives of the arts of sculpture, architecture, and painting, was evidently an exercise in self-advertisement. It may also celebrate the move of the Royal Academy in 1780 to rooms in Somerset House, the masterpiece of Chambers, in which Wilton undertook much decorative carving. [4] Both architect and sculptor had long been distinguished by Royal patronage. The elegant Wilton, to be elected Librarian and Keeper of the Royal Academy in 1786 and 1790 respectively, had been appointed sculptor in ordinary to the King in 1761. Chambers, Knight of the Polar Star, had come to dominate the Office of Works since his initial appointment (as Treasurer) in the Instrument of Foundation of the Royal Academy. In 1782 he was appointed first surveyor-general and comptroller of the Office of Works. Reynolds, elected first President of the Academy and knighted in 1769, would not be further distinguished by the King until 1784 when he succeeded Ramsay as Principal Painter. He had previously painted the young Wilton in Florence in 1752 (NPG 4810) and had painted Chambers in 1756 (NPG 27), and 1777-80 (a portrait commissioned by the Royal Academy). In 1771 Chambers had designed for him Wick House at Richmond. But the President remained a little in awe of his well-established Treasurer and Wendorf has observed that Rigaud’s group hints at uneasiness, the central cluster of gesturing hands suggesting the two are essentially at cross purposes, 'engaged in an administrative stand off'. [5]