7 of 7018 portraits matching these criteria: 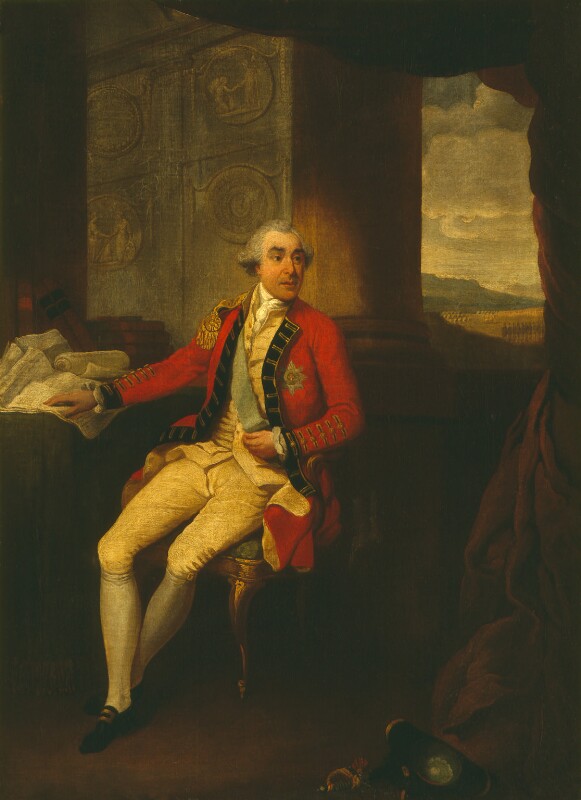 Inscribed verso: General Earl of Charlemont/Copy from the Original in M Walcots possession, by JGD 1784.

The original portrait, presumably that now in the National Gallery of Ireland (4051) [1] and evidently painted for ‘Mr Wolcot’, celebrated Charlemont’s command of the Ulster Volunteers and his leadership of the national Volunteer movement. The movement initially led to the Irish parliament obtaining greater legislative independence in 1782, but Charlemont’s plea for moderation subsequently reduced their role. [2]
NPG 176 is dated 1784, the year before the publication of Dean’s mezzotint; it is almost the same size, and it appears possible that ‘JGD’ was the engraver himself, who is known to have painted occasionally. [3]

Blue-grey eyes, grey powdered hair, wearing the light blue ribbon of St Patrick, and the irregular uniform of a volunteer general:1 red coat with black facings and gold trim, cream waistcoat and breeches, his black hat with a gold trim on the floor beside him with his sword; he sits in a green chair, his right hand resting on papers inscribed ULSTER VOLUNTEERS, lying on a table covered with a green cloth; on the far wall are four medallions lettered VALOUR, HIBERNIA RESURGENS, CONCORDE and MODERATION; in the distance troops are drilling.

By descent to the 3rd Earl of Charlemont,1 from whom purchased 1864.

1 Who wrote to Scharf, 28 May 1864 saying that the portrait ‘was painted from life by I believe Livesay, but at all events by the artist who painted the portraits of the first Knights of St Patrick at the time of the Institution of the order [i.e. J. K. Sherwin] … [of several portraits he had of his grandfather] this is the only full length & the only painting which represents him in the Uniform of General in Chief of the Volunteers of 82 & with the star & ribbon of the order of S.P.’ (NPG archive).

1 J. C. Smith, British Mezzotint Portraits, 4 vols., 1878-84, 5. The papers on the table inscribed: To General Earl of Charlemont Dublin; Thanks of Parliament to the Volun[teers]; the date 11 Feby 1782 follows Ulster Volunteers. The plaques on the wall inscribed: Adsur/toribus/Libertatis/publicae; Hibernia resurgens, Concordia and Moderationi.