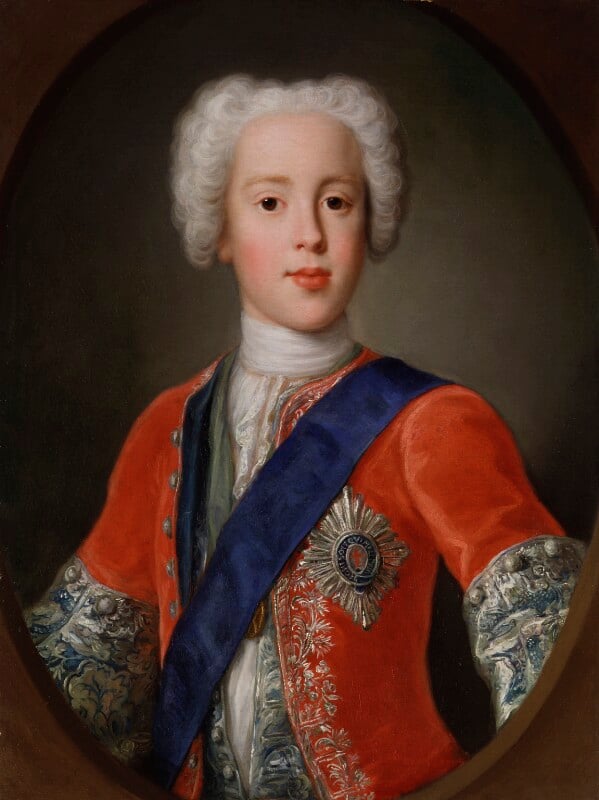 The Edelinck engraving can be dated from letters in the Stuart Papers stating it 'was done in Paris in the last months of 1726, from a painting begun at Rome and finished at Albano before June of the same year, and sent to Paris as a present long promised to Father Lewis Innes, Principal of the Scots College in Paris'. [1] The present full length there is not the portrait referred to. Miss Stuart-Wortley associates the type with a letter from James written on 16 November 1729: ‘I have had my children's pictures lately done, which are very like'. [2] She also mentions other copies noted in the Stuart Papers and possibly of the 1732 type by David. In NPG 434, though looking older than six, the sitter seems rather too young for twelve, and indeed younger than in the two portraits dated 1732.

Large dark brown eyes, thick lips, fresh complexion, own hair powdered white; [1] white neck-band, shirt with lace frill, scarlet jacket with a flower pattern edging down the front, deep cuffs embroidered with silver and blue lace, matching waistcoat, open to the waist; the Garter star and ribbon, underneath, the jewel of the Thistle partly visible on a green ribbon round his neck; plain grey background; lit from the left; in a plain brown painted oval. On the strength of its similarity to Largillière's picture of James and his sister, [2] NPG 434, when acquired, was attributed by Scharf to this artist. For various reasons, however, the portrait may be associated with David. The face mask relates to the younger whole length at Stonyhurst in which the Prince points to a coronet. Though attributed at times both to Gennari [3] and Nattier, [4] it is very near the engraving by N. Edelinck [5] lettered Davidde [pinx]. David was appointed one of 'His Majesty's painters' in 1718 [6] and for the twelve years following there are numerous references to him, including payments. A. E. Haswell Miller thinks it likely that he painted Charles every year or two, [7] and NPG 434 clearly belongs to such a series of portraits. The Stuart papers indicate that he delivered a portrait of the Prince wearing frocks to Sir William Ellis on 12 June 1723, and that in September he sent a bill for a picture 'at length of yr Maties and the Prince'. [8] The single portrait is missing. One sketched by Scharf, 26 April 1870, [9] is believed to represent Charles at the age of five. A similar oil was in the possession, 1955, of Dr R. B. Dollfus de Volckersberg, and a miniature after the type was at Cultoquhey, collection J. Maxtone Graham, 1911. This group is too early for our type. NPG 434 is, however, extremely close to two signed and dated Davids of 1732, in the Borghese-Aldobrandini family and the Scottish NPG (888), the latter showing different embroidery on the waistcoat. A rather stiffly painted variant of the Prince in armour is in the collection of the Comte Guy de Villefranche.

Some losses in the varnish, otherwise good.

Bought, 1876, from Alexander Fletcher of Nottingham Place, Regent's Park, together with NPG 433 and 435 and, like them, said to have been bought from Cardinal York's secretary, Count Malatesta, to whom they had been bequeathed by the Cardinal.