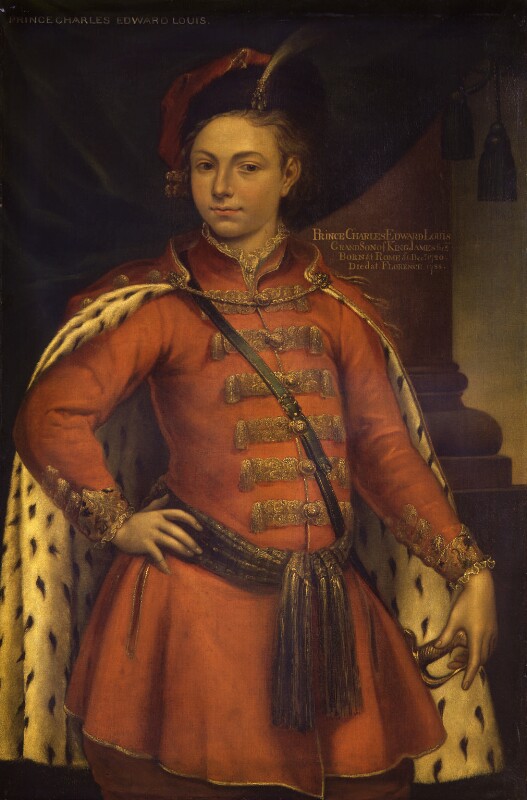 Inscribed in white, top left: PRINCE CHARLES EDWARD LOUIS, and in a different hand, in yellow, on the column: PRINCE CHARLES EDWARD LOUIS./GRANDSON OF KING JAMES the 2.nd/BORN at ROME 31.st Dec.r 1720./Died at Florence. 1788. [1]
A letter in the Gallery archives from Miss Helen Farquhar gives the following transcription from a label on the back of the frame: 'This picture was once the property of Clementina Jacobina Sobieska Macdonald, a god-daughter of "James III", who eventually married Dr Schnell, tutor to the Duke of Cumberland's son, afterwards the blind King of Hanover, George V. A similar portrait only smaller was in the possession of Count Joseph Schonbrun ... left by Mrs Schnell to Anne, Lady Cullum wife of Sir Thomas Gery Cullum, 8th ... Bart of Hardwick ... whom she had brought up'. [2]

The likeness is not demonstrable and the identity has always been open to doubt. The features do not appear to be drawn from life and the only evidence is the reputed provenance and the Polish costume, his mother Maria Clementina Sobieska (q.v. NPG 1262) being the grand-daughter of John Sobieski, King of Poland.

Received, 1922; bequeathed, with other portraits, by G. Milner-Gibson-Cullum.